I would never call the Ferrari Roma a “retro” sports car. To do so would downplay and deny the forward-looking aspect of its...
Read more
AUTO

ANN ARBOR, Mich. — Genesis has garnered the attention of the automotive industry, from observers and enthusiasts like ourselves, to that of its...
Read more
AUTO

VW may make Bentley a subsidiary of Audi

FRANKFURT — Volkswagen plans to make British luxury carmaker Bentley a subsidiary of its Audi division as it seeks economies of scale among...
Read more
AUTO

This trike grows with your child

Autoblog may receive a share from purchases made via links on this page. Pricing and availability are subject to change. Transcript: A trike...
Read more


“These things are badass,” my neighbor said, while both of us gazed over the Twister Orange 2020 Mustang Shelby GT500 in front of my house. An hour had passed since its delivery, and already this car had brought out the neighbors. I hopped in the driver’s seat for the first time and pressed the start button. The pony car roared to life. I made a beeline for the freeway to open it up a bit, and found myself forgetting about the mountain of worries 2020 has brought.

A car like that doesn’t go unnoticed on the streets, especially in Metro Detroit. People stop and stare as you drive by, for two reasons: First, the car’s brand new; I’ve only seen one other GT500 on the road around here. Second, the exhaust. When in Sport mode, the GT500 is not subtle. The exhaust roars as the gears shift through its seven-speed dual-clutch transmission.

That Tremac gearbox is incredibly smooth, so I’m fine with a DCT instead of a manual. Plus, it allows me to focus completely on handling, which, at 760 horsepower, is more important to me than rowing my own gears. I’d really prefer to not star in the next viral “Mustang leaving Cars and Coffee” video. 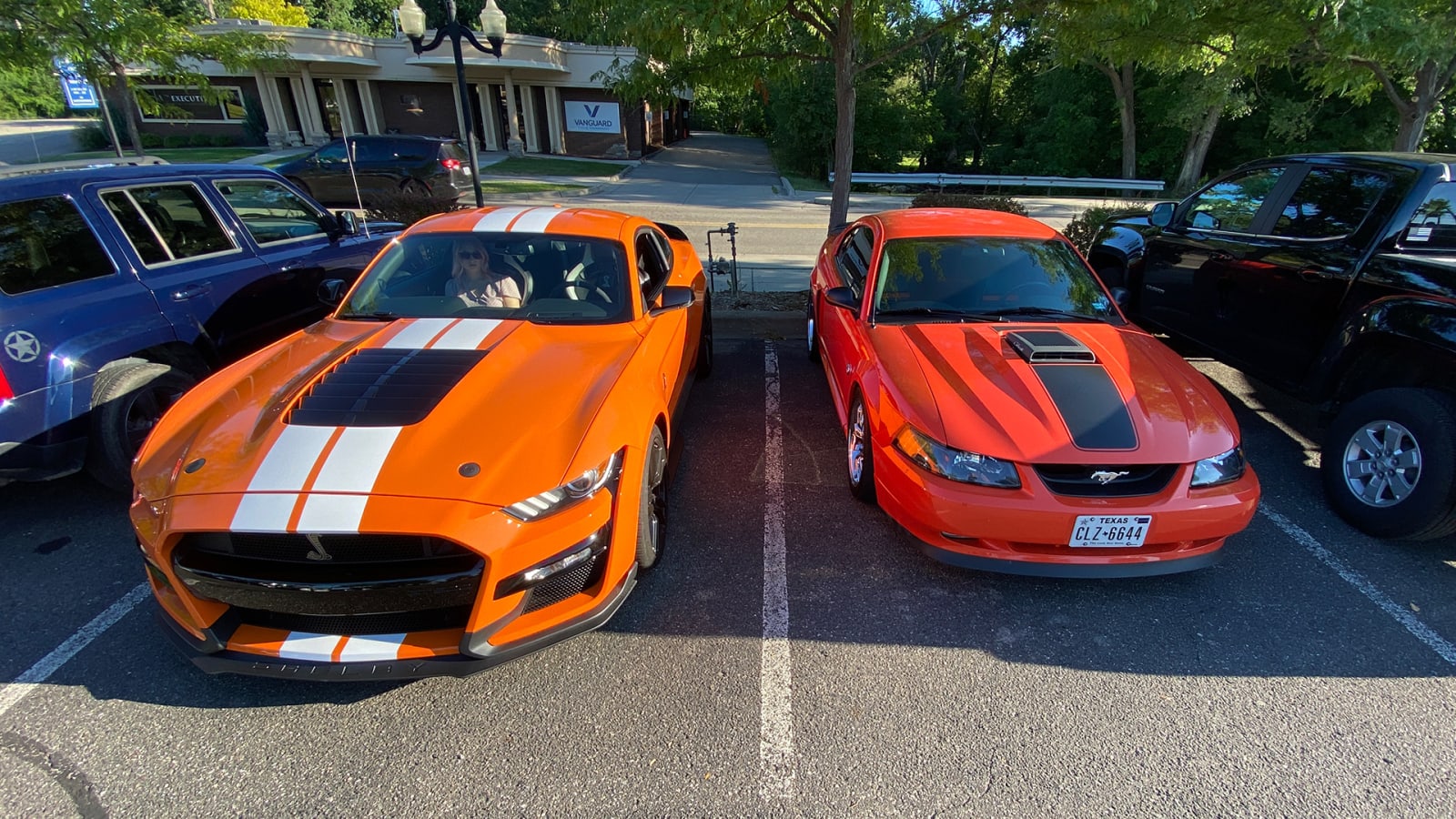 The highlight of the week came after grabbing lunch one day, when I found a Competition Orange 2004 Mustang Mach 1 40th anniversary edition with a Cobra Jet engine parked next to the GT500. Not until I saw them side by side did I realize how big the Mustang has become in the past 16 years. It completely dwarfed the 40th Anniversary Edition outside, but thanks to the smooth, incredibly accurate Sport steering mode and the Brembo brakes, the GT500 doesn’t drive big. You can confidently throw it into corners and still feel connected to the road. In Normal mode, the steering becomes a bit numb for my liking. Thankfully you can keep the car in its Normal drive mode and still activate Sport steering, for those early mornings when you don’t want to wake the neighbors as you leave for work. Once you get out of the neighborhood, though, flip it to Sport and all bets are off.

At 6-foot-4, I am always concerned about comfort when getting into performance cars, but not in the GT500. There is more than enough headroom and legroom, and the bolstered Recaro seats feel secure, even when rounding corners right at the speed limit. Visibility is decent as well.

Starting at the not-so-frugal price of $72,900, the Shelby GT500 comes with the 5.2-liter supercharged V8 and the Magneride Damping system standard. Ours was priced at $81,980, with the most expensive option being the Technology Package. Twister Orange, which in my opinion is the best color, costs an additional $495.

It’s not often that a vehicle hits your driveway with more than three times the horsepower of your normal, performance-oriented daily driver, and while $80,000 can buy a variety of vehicles, after a week, the GT500 still somehow felt like a bargain, albeit a beefy, loud and incredibly fast one. It’s easily my favorite Ford Mustang to date.

Wealthy families are racing to change their estate plans and pass hundreds of billions of dollars to their kids in the event of...
Read more

Eric Trump says he will comply with NY AG subpoena, but only after 2020 election

US businessman and son of the US president Eric Trump.Mandel Ngan | AFP | Getty ImagesLawyers for Eric Trump said Thursday that he...
Read more

2021 Ford Mustang order guide leaks, and the Performance Pack 2 is out

The 2021 Ford Mustang order guide is out, and there are a few notable changes we didn’t know about until now. Most important,...
Read more

U.S. President Donald Trump approaches reporters as he departs on campaign travel to Minnesota from the South Lawn at the White House in...
Read more
TOP NEWS

A person wearing a mask pushes a dolly cart past a Coca-Cola truck as the city continues Phase 4 of re-opening following restrictions...
Read more

The weak dollar is the ‘only support’ for oil prices, analyst says

Oil prices are likely to continue creeping up simply due to a weak dollar, an analyst said on Thursday."As far as fundamentals are...
Read more
WORLD NEWS

A pedestrian with a umbrella walks pass a logo of Deutsche Bank in Frankfurt am Main, Germany.Thomas Lohnes | Getty ImagesSINGAPORE — Germany's...
Read more

D Color Flawless DiamondSource: Sotheby'sSotheby's is set to auction off a 102-carat diamond that could become the most expensive jewel ever sold to...
Read more
BUSINESS

Not clear where funds will come from

In a speech unveiling his health-care "vision" for America, President Donald Trump made a surprise announcement: that cash cards will soon be sent...
Read more