After showing the 2021 Hyundai Santa Fe back in June, Hyundai has finally seen fit to give us details on what will power the updated crossover. The entire engine lineup has been changed to larger, more powerful and more efficient engines. And now there’s a hybrid.

The base engine is a naturally aspirated 2.5-liter four-cylinder, replacing the 2.4-liter unit. Power increases by 6 horsepower to 191 and 4 pound-feet of torque to 182. It continues to use an eight-speed automatic transmission. In internal testing, since official fuel economy numbers aren’t available yet, it gains 1 mpg for 26 in combined driving when paired with front-wheel drive. The all-wheel-drive version stays the same at 24 mpg.

Replacing the old 2.0-liter turbo engine is a turbo 2.5-liter engine, which also receives an eight-speed dual-clutch transmission instead of a traditional automatic. It sees the biggest power gains of 42 horsepower and 51 pound-feet of torque for totals of 277 and 311 respectively. Regardless of being front- or all-wheel-drive, the turbo Santa Fe gains 2 mpg in combined driving based on internal testing. The front-drive version now gets 25 mpg and the all-wheel-drive version gets 24.

Then we have the new hybrid model. Unfortunately, Hyundai hasn’t given any fuel economy numbers for it, which are arguably the most important specifications. But we do have the rest. It pairs a turbocharged 1.6-liter four-cylinder with a 17-horsepower starter-generator motor and a 59-horsepower drive motor. Total output is 225 horsepower and 195 pound-feet of torque. Power goes through a 6-speed automatic transmission and a standard all-wheel-drive system. There’s also a plug-in hybrid model coming later next year, but Hyundai hasn’t given any details on that. 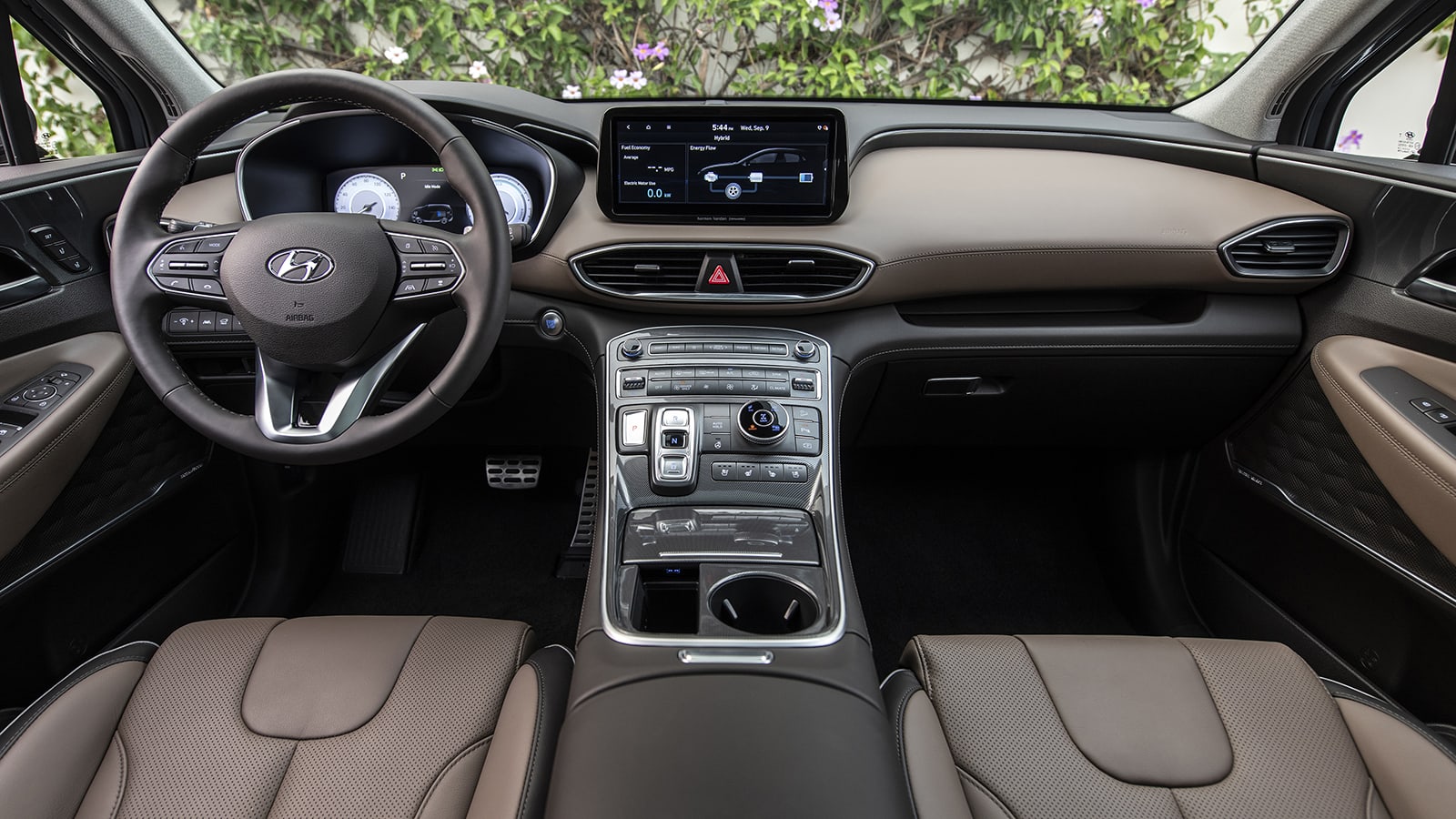 Besides the new engines, Hyundai has made a number of other changes to the Santa Fe’s mechanicals and its features. The company says the updated crossover is lighter than before, thanks to more high-strength steel use. Drag has been reduced from 0.34 Cd to 0.33 thanks to redesigned belly pans. The standard forward collision prevention system now includes cyclist and junction-turn detection. Adaptive cruise control now has lane following with the ability to adjust speed for some corners. Remote parking assist, remote starting with seat heating or cooling, and wireless Apple CarPlay and Android Auto are all available, too. And of course the interior was fully redesigned.

Finally, the Santa Fe is picking up a new range-topping trim called Calligraphy. It can be spotted from the outside by its unique grille and 20-inch wheels. Inside it gets Nappa leather upholstery, faux suede headliner, additional ambient lighting and an 8.5-inch heads-up display. It comes exclusively with the turbocharged 2.5-liter engine and all-wheel drive.

Pricing for the new Santa Fe has not yet been announced. We likely won’t have to wait too long, though, since the first models are slated to hit dealers by the end of this year, so expect pricing to come out just before launch.

CNBC's Jim Cramer said Tuesday he believes it's a favorable environment for investors to put money to work in the U.S. stock market.Positive...

Like a summer tentpole movie that the studio won’t shut up about, certain cars can hardly live up to their marketing hype. That...

What Dr. Fauci can do now that he is fully vaccinated against Covid

How much you need to invest to save $3 million

BlackRock is ‘underweight’ emerging market stocks due to coronavirus

It’s ‘tough’ to talk about the future of the sport

Dungeons & Dragons had its biggest year despite the coronavirus