Kia has released a full set of details about the new 2021 Sorento. Its brawny exterior design is complemented by a longer list of technology features, more all-terrain capability, and an available plug-in hybrid powertrain.

We’ve seen the fourth-generation Sorento before, as Kia unveiled it online earlier in 2020, but this is our first glimpse at the American-spec model. While it looks a lot like the variant that will be sold in global markets, the range will include an outdoorsy equipment package named X-Line, offered as the AWD version of SX-Prestige model, which adds an inch of ground clearance, specific 20-inch alloy wheels, a bridge-type roof rack, and a handful of rugged-looking exterior accents. It also brings a center locking differential and electronic hill descent control. While it’s not a true off-roader and we wouldn’t pit it against a Jeep Wrangler, it sounds like it will be more capable over rough terrain than your average crossover.

Lighter and more spacious inside than its predecessor, the 2021 Sorento comes standard with an eight-inch touchscreen and six USB charging ports. Buyers willing and able to move up the trim hierarchy and tick a few boxes on the list of options unlock a 12.3-inch digital instrument cluster, a 360-degree camera, eight USB ports, a 10.25-inch touchscreen for the infotainment system, cloud-based navigation, plus multi-connection Bluetooth technology that lets the passengers simultaneously connect two phones. Owners can also use an Amazon Alexa- or Google Assistant-enabled smart speaker to remotely start the engine, among other functions.

The 2021 Sorento range will ultimately include four powertrains. Entry-level models come with a 2.5-liter four-cylinder engine that develops 191 horsepower and 182 pound-feet of torque. Front-wheel drive and an eight-speed automatic transmission come standard, and all-wheel drive is offered at an extra cost. Next up is a turbocharged version of the 2.5-liter, which makes 281 horsepower and a stout 311 pound-feet of torque. It’s also offered with an eight-speed automatic and either front- or all-wheel drive, and it can tow up to 3,500 pounds. 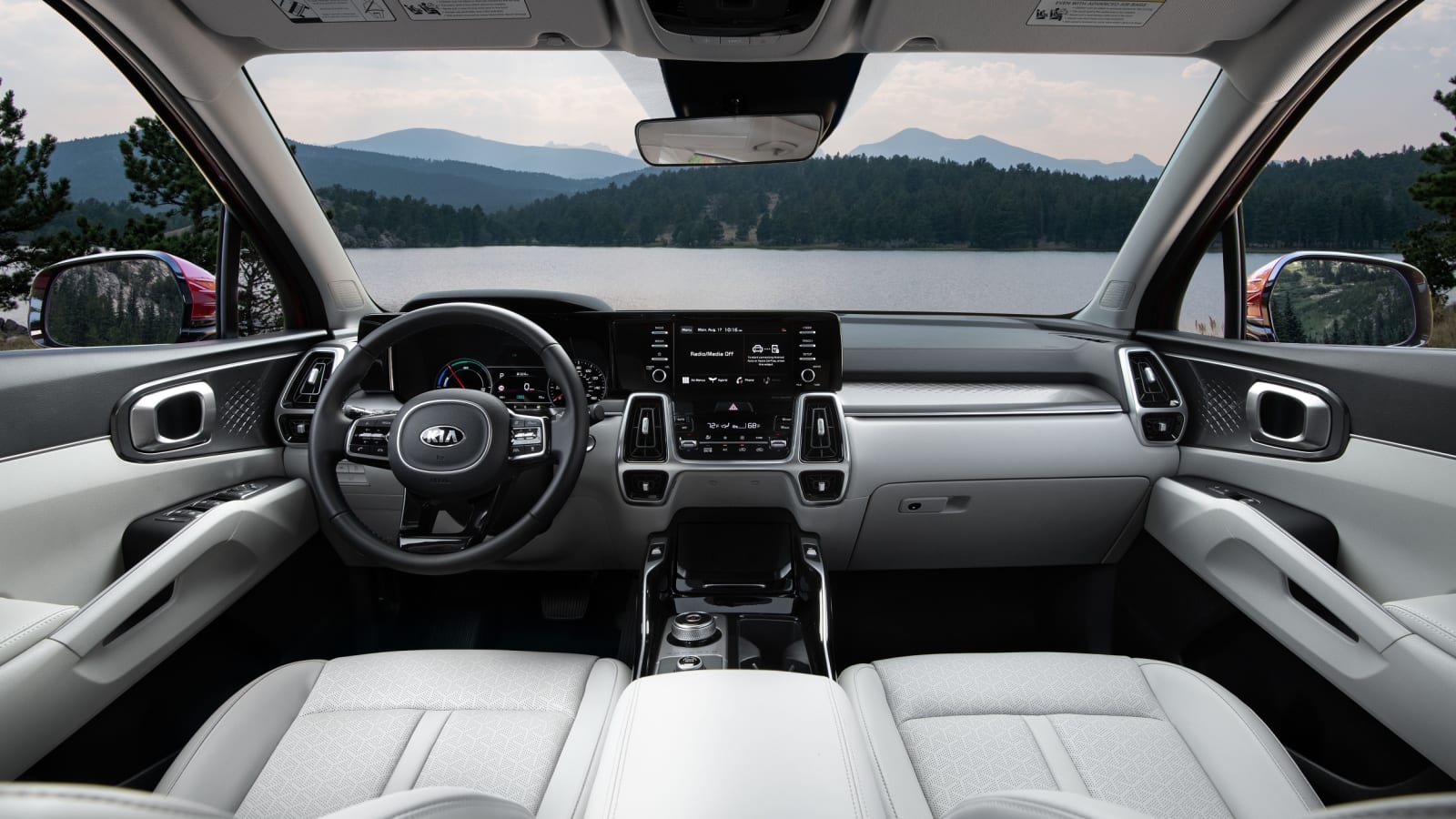 Motorists who want an electrified SUV have two choices. The standard hybrid system teams a turbocharged, 1.6-liter four-cylinder with a 44-kilowatt electric motor fed by a 1.5-kilowatt-hour battery. It sends 227 horsepower to the front wheels (all-wheel drive is not available) via a six-speed automatic transmission, and it helps the Sorento return an estimated 39 mpg in the city, 35 mpg on the highway, and 37 mpg combined.

Finally, the plug-in hybrid system Kia will release in 2021 is built around the aforementioned 1.6-liter, but it gains a more powerful 66.9-kilowatt motor and a bigger 13.8-kilowatt-hour battery pack. It sends 261 horsepower to the four wheels via a six-speed automatic, and the firm quotes an electric-only driving range of up to 30 miles.

Built in Georgia alongside the bigger Telluride and the K5 introduced to replace the Optima, the 2021 Kia Sorento will arrive in showrooms nationwide before the end of 2020. Kia will split the lineup into five trim levels called LX, S, EX, SX, and SX-Prestige, respectively. Pricing information will be released in the weeks leading up to its on-sale date. For context, the 2020 model starts at $26,990, and that figure shouldn’t increase dramatically.

A worker wearing a protective face mask operates a forklift to move boxes of face shields ready for shipment at the Cartamundi-owned Hasbro...

SINGAPORE — A recent spike in bond yields spooked global markets, but JPMorgan Private Bank says it may be a reflection of "growth...

A man walks past a Wells Fargo Bank branch on a rainy morning in Washington.Gary Cameron | ReutersCheck out the companies making headlines...

Nikolay Storonsky is the founder and CEO of fintech start-up, Revolut.Revolut, the biggest European digital bank with 13 million users, is close to...

Danny Meyer feels ‘so much hope’ about a restaurant recovery

WHO warns Covid variants are highly problematic, could stress hospitals

Renters return to Manhattan in November, driving 30% gain in leases

How to use your iPhone’s health-tracking features