The Lexus IS has now been with us for more than two decades. First introduced in 1999, it celebrated its 21st birthday this year and, to mark the occasion, Lexus hit the compact sedan with a significant overhaul, including a revamped powertrain lineup, an updated interior, and a much-needed tech update in an attempt to keep the sporty four-door relevant in a market that craves crossovers and SUVs.

So, first things first: The 2021 Lexus IS is not actually new. In fact, Lexus still refers to it as a third-generation car internally, despite the “redesign” and repositioning for 2021, which is ultimately more about the products elsewhere in the Lexus lineup, rather than the IS itself. We’ll come back to that.

Unveiled in June, the 2021 IS model range has been pared down to just two models, the IS 300 and IS 350 F-Sport. The highlight of the standard equipment sheet is an 8-inch touchscreen that’s nearly 5.5 inches closer to the driver than the outgoing model’s. A 10.3-inch touchscreen is available as an upgrade, and perhaps most notably, the IS is finally available with Apple CarPlay and Android Auto integration suites.

Despite the common name and number, however, the IS 300 is in fact offered with two very different engines depending on how many wheels are driven. Power for the rear-wheel-drive IS 300 comes from a 2.0-liter turbocharged inline-four, which develops 241 horsepower and 258 pound-feet of torque. It’s bolted to an eight-speed automatic transmission. With the IS 300 AWD (pictured below), all-wheel drive is paired with a 3.5-liter naturally aspirated V6 good for 260 hp and 236 lb-ft of torque, and a six-speed automatic transmission. Nothing confusing about that, is there?

Thankfully, things are a bit more normal with the IS 350 F Sport. Its high-output V6 is alive and well, with its naturally aspirated displacement of 3.5 liters and an output of 311 horses and 280 pound-feet of twist. It’s the same engine regardless of drivetrain, though rear-wheel drive is still tied to the eight-speed automatic while all-wheel drive gets the six-speed. The quickest variant is the RWD model, which will crack off a run to 60 mph in 5.6 seconds. The AWD variant is intended to be an all-weather option, not a performance enhancer.

The observant reader will note that we keep referring to the IS 350 F Sport, rather than simply the IS 350. That’s because the F Sport package is no longer available on the IS 300 and is instead baked into every IS 350 built for the U.S. market. It includes a cold-air intake, a sportier exhaust, a sound generator for the cabin, 19-inch wheels (18s are standard), a sprinkling of F Sport badges, plus a body kit that adds bits like a rear spoiler and a diffuser integrated into the rear bumper. Heated and ventilated front seats are included, too. An available handling package adds an adaptive suspension for those who want access to an even sharper ride, but those who stick to the base F Sport will benefit from a static suspension tuned to be about as sporty as the outgoing model’s sharpest adaptive mode.

So, why the odd mix-match of drivetrains and the carry-over six-speed transmission? The same reason the chassis itself is effectively unchanged: cost. It’s no secret that sedans are suffering, and to make matters more complicated, Lexus has two of them at effectively the same price point.

The Avalon-based (and therefore front-wheel-drive) ES sedan may no longer be the entry-level model in the Lexus lineup thanks to the introduction of the UX and NX crossovers, but it remains one of the brand’s most approachable and inexpensive offerings. For just $900 more than the IS, you get substantially more interior space and a less enthusiast-oriented ride (though it’s hardly the rolling couch of old), which makes it a distinctive offering at this luxury price point.

It also means that Lexus effectively has both a compact and a midsize sedan available at the exact same price point, but that’s not as nonsensical as it may seem. The ES appeals to buyers who care more about comfort, practicality and in the case of the ES Hybrid, fuel economy. By contrast, the IS can exist to please the younger buyer who wants something sportier, louder and more stylish. And this isn’t just hypothetical; the IS attracts some of the youngest buyers in Lexus showrooms, and some of the youngest sport sedan buyers segment-wide, Lexus says. 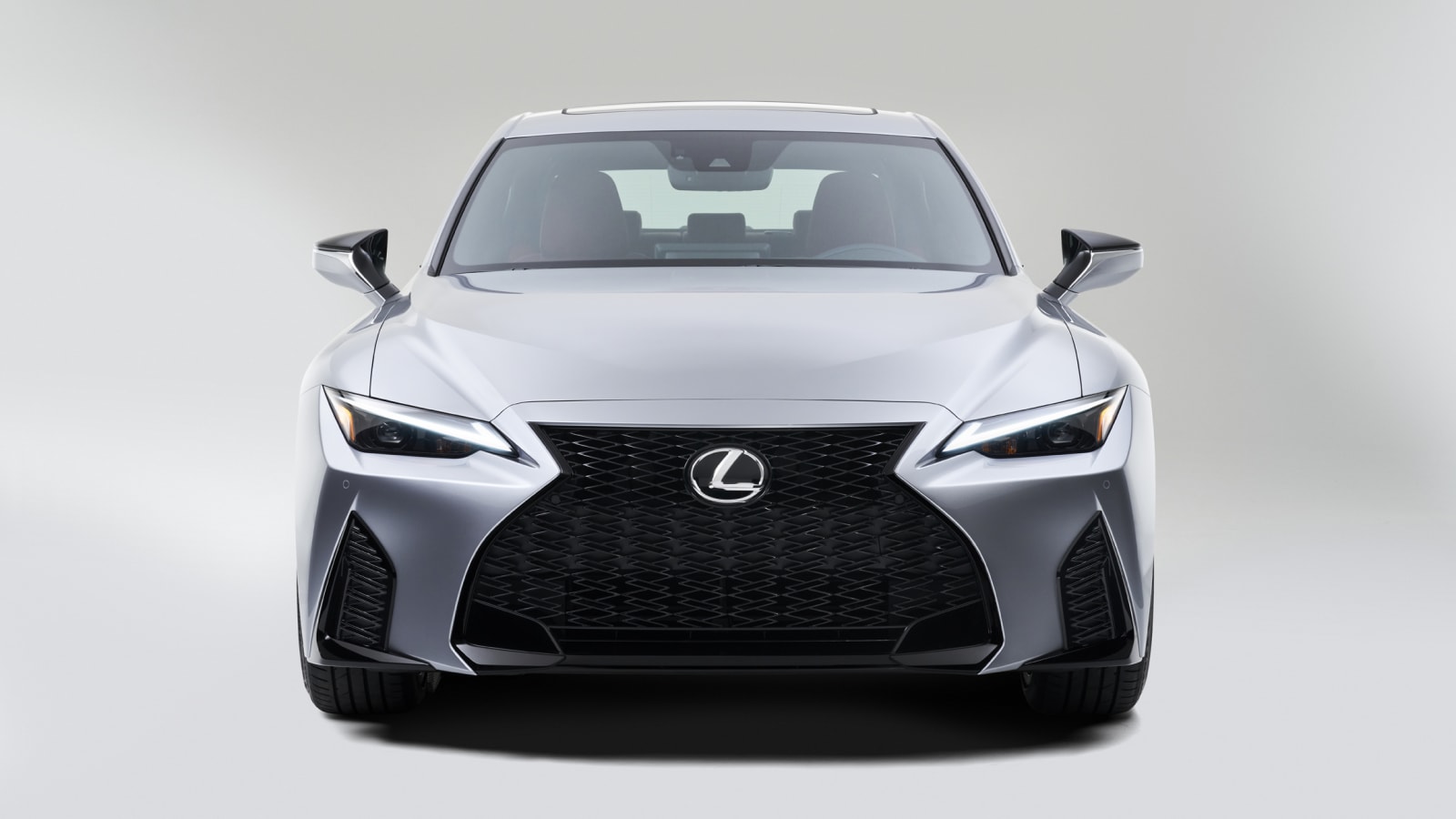 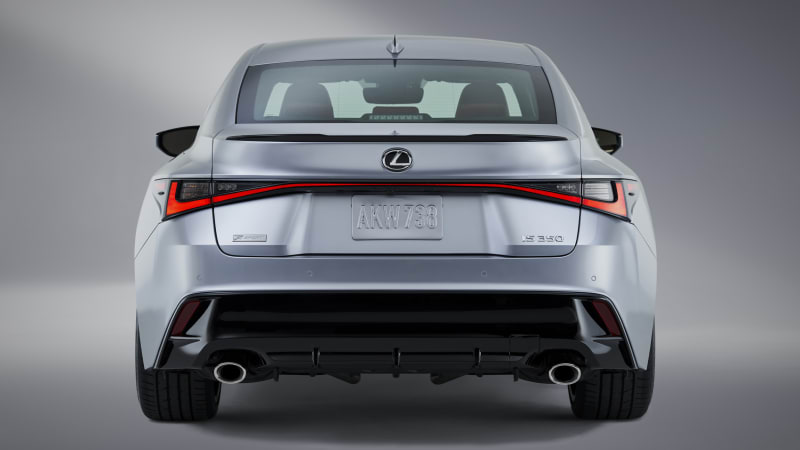 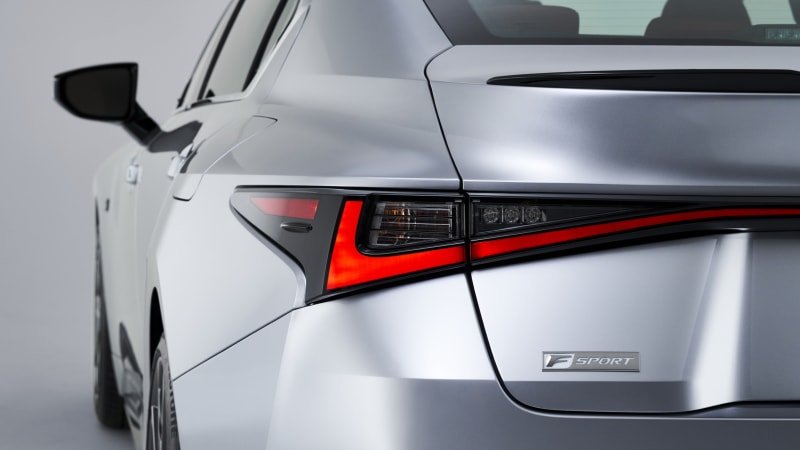 “What we had foremost in mind in developing the new IS was to make it a car that excelled in communicating with the driver regardless of the road conditions or driving situation,” said Lexus Chief Engineer Naoki Kobayashi when the 2021 model was originally announced. “We aimed to make the new IS a Lexus compact sports sedan that provides high-quality riding comfort while offering a high level of vehicle control.”

In short, by committing to sedans, even with this money-saving approach, Lexus is hoping to keep the door open to young, enthusiast-leaning buyers. But will enthusiasts accept what is essentially a second refresh of an aging sport sedan platform as a viable option?

If there’s an upside to the IS having old bones, it’s that they’re pretty good. Dynamically, the third-gen IS has always been pretty solid, despite lacking a true performance variant. We’ve occasionally criticized the F Sport package for being a bit too harsh over broken pavement, but by and large, the outgoing IS handled and rode well enough.

While the fundamental chassis may not have changed for 2021, the suspension was completely overhauled nonetheless. We tested a 2021 IS 350 F Sport AWD with the Active Variable Suspension add-on, and frankly, it impressed. Left in normal, it’s plenty comfortable on Detroit’s cratered concrete surfaces, and even cranking it up to the sportiest setting doesn’t degrade the ride quality too significantly.

The V6 does an adequate job, and with the help of some electronic wizards, sounds quite good. But age has its drawbacks, and sadly, the naturally aspirated 3.5-liter just doesn’t feel like a modern engine. Compared to the boosted six-cylinders offered in competitors such as the BMW M340i and Mercedes-AMG C43, the Lexus mill feels a bit flat. We didn’t get the opportunity to sample the downrated V6 in the AWD IS 300, and frankly we’re OK with that; we can’t imagine that it’s particularly inspiring. The turbo-four in the rear-wheel-drive model seems far more appealing.

And while many sport sedans are engineered to take advantage of their all-wheel-drive systems for performance gains, the implementation here only adds weight and complexity, not to mention a noticeable protrusion into the driver’s side footwell to make room in the center tunnel for the necessary drivetrain components. Sure, it’s cushioned, but it’s tight in there. And while the associated six-speed transmission still works perfectly well, it does look a bit dated on a spec sheet next to the eight-speed utilized on RWD models. 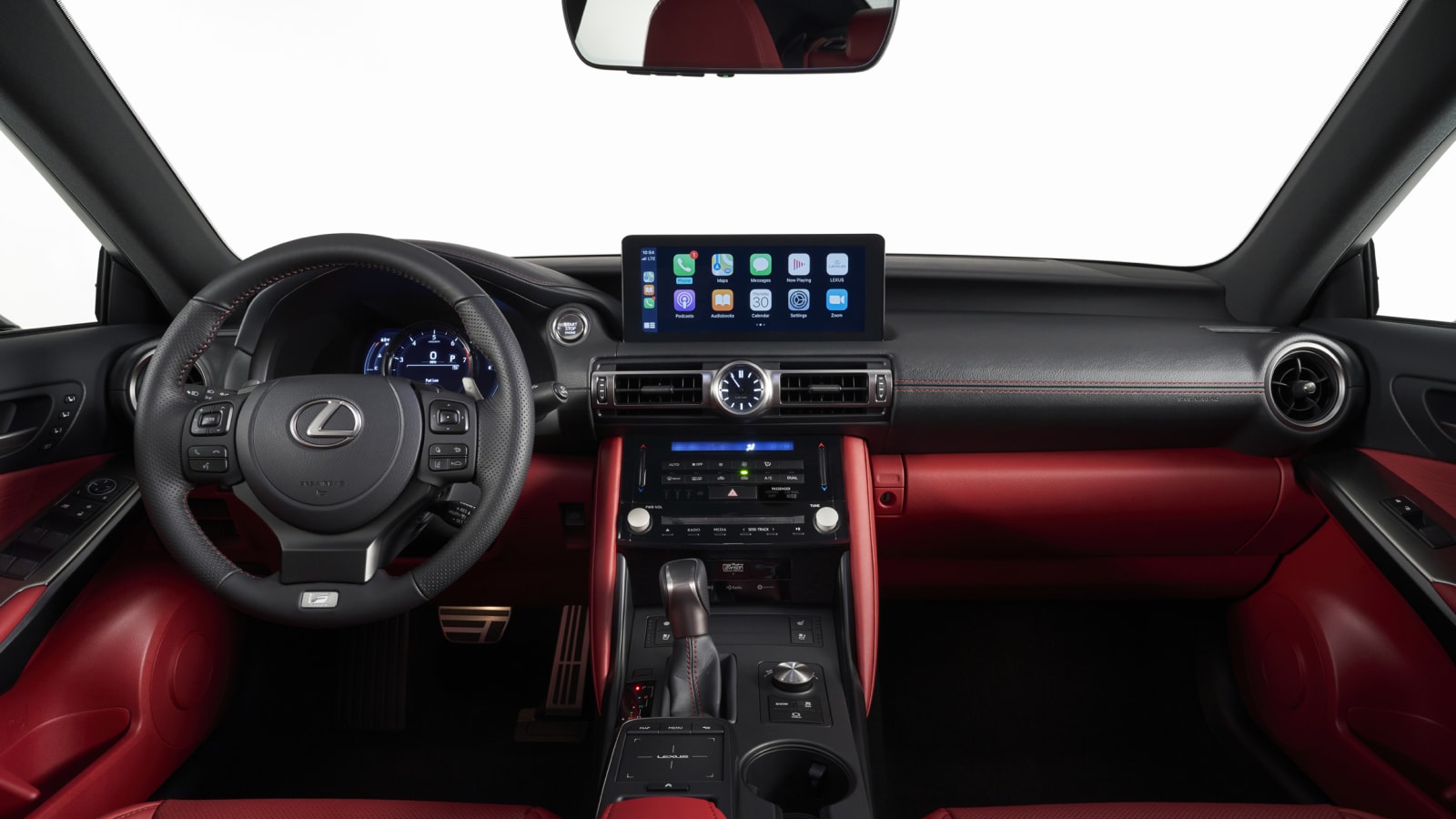 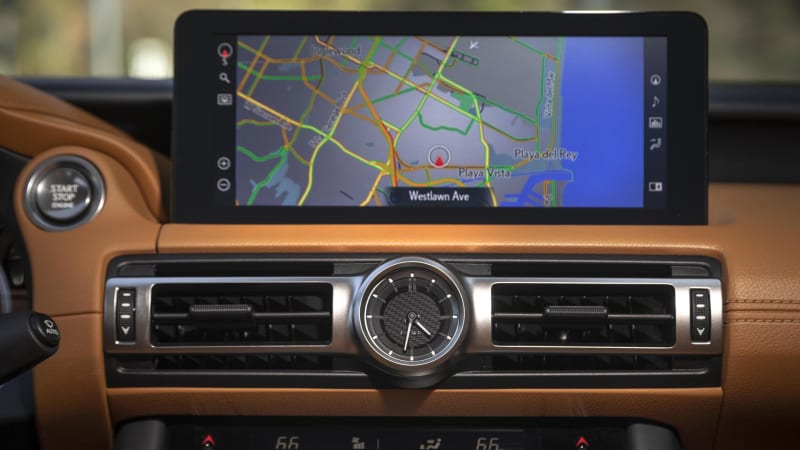 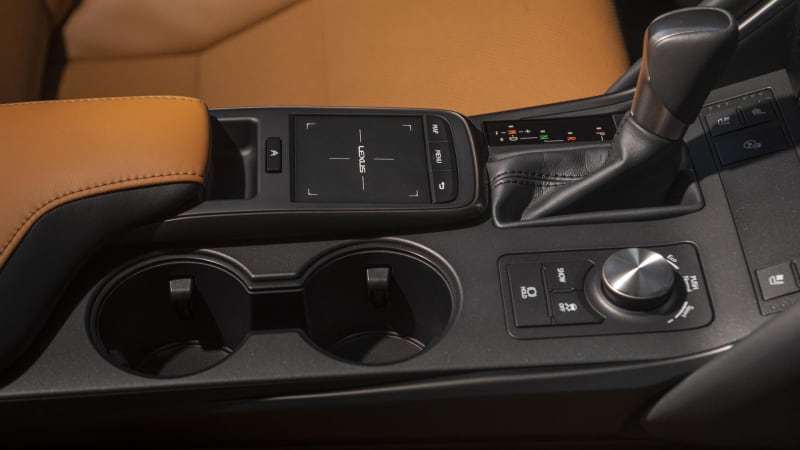 Fortunately, Lexus made significant strides where the IS needed them most: inside. The updated infotainment system is night-and-day better than what was offered previously. The inclusion of smartphone integration (Android Auto and Apple CarPlay) is a massive upgrade in and of itself, and as in the 2020 RX, the addition of touchscreen functionality makes the Remote Touch interface much easier to live with. The available 10.3-inch screen is crisp and responsive, its closer location is a big help, and the clearly marked menus are easy to navigate via touch. The old mouse-like touchpad remains, but you never have to use it if you don’t want to. Trust us. You don’t want to.

And this is yet another opportunity for us to curse the silly turn signal stalks Lexus insists on using these days. The return-to-center action just leads to confusion and unintended signals, and for the life of us, we can’t come up with a single justification for their existence. Nothing about them is intuitive or beneficial, and their greatest contribution to society is making Lexus drivers look oblivious as they cruise for miles with an indicator on.

We found the seats both comfortable and supportive, though they lack some of the adjustment options available on competitors, such as thigh extensions. With the F Sport package, they are both heated and ventilated, which is a nice touch. The faux leather upholstery is soft and supple, too – far more so than many competitors’ synthetic “hides.”

All told, the 2021 Lexus IS represents a healthy evolution of the compact sport sedan formula. It may not be a break-out star, but it’s a solid foundation upon which Lexus can potentially develop more enthusiast-friendly options. Some more inspiring engines would be a good next step.

Ideas inspired by nature could change how towns and cities look

I'm always on the lookout for cars and trucks with ridiculously high final odometer readings when I'm scouring the car graveyards for interesting...
Read more

The historic fall and rebound in the major market indexes this year illustrates just why investors should focus on long-term investing, Acorns CEO Noah...
Read more

Just eight days after McDonald's kicked off its collaboration with rapper Travis Scott, the fast-food giant is reporting some ingredient shortages tied to...
Read more

Best Buy's third-quarter earnings on Tuesday soared past Wall Street's expectations, as the company continued to see strong demand for technology during the...
Read more

Trump doctor says president has not had stroke or heart emergencies

Clouds pass over the Capitol Dome as the Senate resumes debate on overriding the veto of the National Defense Authorization Act (NDAA) on...
Read more
TOP NEWS

Tear gas is released into a crowd of protesters during clashes with Capitol police at a rally to contest the certification of the...
Read more
WORLD NEWS

President of the AFL-CIO Richard Trumka speaks about his role in securing labor protections in the USMCA trade agreement during an interview with...
Read more
BUSINESS

The U.S. Centers for Disease Control and Prevention is considering shortening it's recommended two-week quarantine period for people who have come in contact...
Read more
BUSINESS

Xpeng CEO He Xiaopeng stands next to the company's P7 electric sedan as he addresses media at the 2020 Beijing auto show.Evelyn Cheng...
Read more

TikTok can continue to operate in the U.S., Commerce Department says

The U.S. government has given TikTok a stay of execution.The Commerce Department said Thursday it will abide by an Oct. 30 temporary injunction...
Read more
TECH

Facebook helped 4.4 million people register to vote in the U.S. this year