Happy Halloween, everybody. There's no real Hellcat news in this post. No growl of the second-scariest Dodge Challenger SRT's 707-horsepower engine, no shriek...
Read more
AUTO

The SSC Tuatara top-speed controversy is far from over. Jerod Shelby, founder and CEO of SSC, released a video where he says SSC...
Read more
AUTO

IMMENDINGEN, Germany — As Tesla touts the cutting-edge nature of its new Full Self Driving software, rival Mercedes-Benz says it has developed a...
Read more


Mini’s newest special-edition model is a tribute to a victory that was as unexpected as it was significant. Northern Irish pilot Paddy Hopkirk won the 1964 edition of the Monte-Carlo Rally in a Cooper S, impressively beating far more powerful cars, and the two-door 2021 Hardtop Cooper S Paddy Hopkirk Edition celebrates this victory.

Fittingly, every Paddy Hopkirk Edition is finished in Chili Red with a white roof, a combination that echoes Hopkirk’s 1964 model (pictured below). 37 decals on both doors create another visual link between 2020 and 1964. Mini also added 17-inch alloy wheels, black trim all around, and a white hood stripe that served as a blank canvas. Look closely: it features 33 EJB graphics (the winning car’s registration number) and Hopkirk’s signature.

His signature also appears on the hatch, on the sill plates, and on the right side of the dashboard. LED headlights, keyless entry, black interior trim, and a leather-wrapped three-spoke steering wheel come standard.

There are no mechanical modifications, meaning the Paddy Hopkirk edition is powered by a turbocharged, 2.0-liter four-cylinder that delivers 189 horsepower and 207 lb-ft of torque. It spins the front wheels via a six-speed manual transmission, though a seven-speed dual-clutch automatic gearbox is offered at an extra cost.

Mini dealers across the United States will begin receiving the Cooper S Paddy Hopkirk Edition in November 2020. It’s one of two special-edition models joining the range for 2021; the second is the heritage-laced Coral Red Edition. Pricing hasn’t been released yet.

“Production is planned for November and December of this year,” said a Mini spokesperson, “with a very limited number expected for the U.S. market. Only a few hundred.” 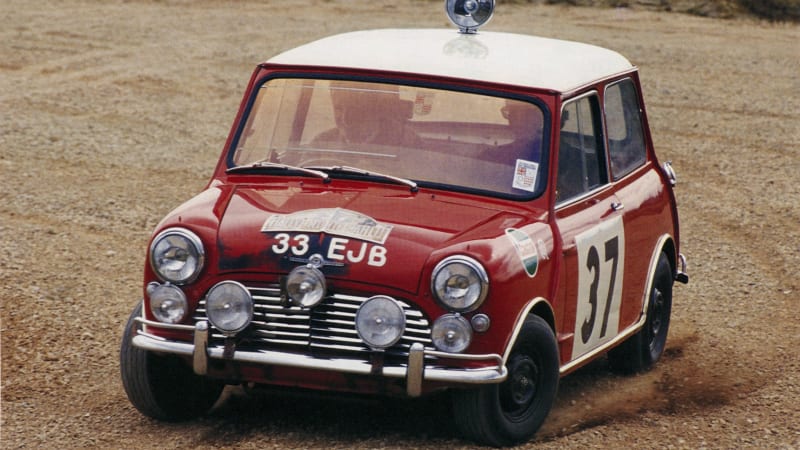 Sir Alec Issigonis envisioned the original Mini as a practical, budget-friendly alternative to bubble cars, not as a rally-dominating machine, but the pocket-sized four-seater quickly proved its mettle on the track. Accomplished engineer John Cooper built the first Mini Cooper in 1959, the year the standard model was released in England, though it was a one-off prototype. Bolstered by a ballooning aftermarket scene, even amateur enthusiasts experimented with ways to extract more power out of the small four-cylinder and fine-tune the car’s handling. It took less than a decade for the Mini to become a force to reckon with at races on both sides of the Atlantic.

Rolls-Royce made the second-generation Ghost about 3.5 inches longer than its predecessor. If that's not enough, the British firm just unveiled a long-wheelbase...
Read more

US and EU need to overcome tensions

As the U.S. election looms, it is time for both sides of the Atlantic to repair outstanding divisions, the former EU trade chief...
Read more

A link between sensory neurons activation and the immune system: Scientists have developed an implantable technology that enabled the discovery of an interaction between...

Pixar’s ‘Soul’ ditches theaters, is heading to Disney+ for Christmas

Festivals of the future ‘won’t be limited by time and space’: CEO

Post-pandemic music and theater performances are likely to use a hybrid model, according to the chief executive of one of Singapore's largest arts...
Read more
WORLD NEWS

SoFi Stadium in Inglewood, Calif.Source: SoFi StadiumGoogle on Friday announced it has a multi-year deal to provide its cloud services to SoFi Stadium...
Read more

YouTube announces TikTok competitor in India, where TikTok is banned

TikTok says it plans to do more to tackle hateful content

The download page for ByteDance Ltd.'s TikTok app is arranged for a photograph on a smartphone in Sydney, New South Wales, Australia, on...
Read more
Influencer
No menu items!
Facebook
Instagram
Twitter
Go to mobile version