These anti-Prime Day deals are from anywhere but Amazon

Autoblog may receive a share from purchases made via links on this page. Pricing and availability is subject to change. Are you anti-Prime...
Read more
AUTO

Mercedes-Maybach's first series-produced entry into the SUV segment lives up to the emblem on its grille in terms of content and, as it...
Read more


Aston Martin’s Q division should be taken very seriously. It just turned out this stunning one-off custom model named the Aston Martin Victor. The Victor is based on a One-77, and it’s the biggest project Q has ever taken on.

Aston used the V8 Vantage of the 1970s and 1980s as the design inspiration for the Victor, making it look like a resto-mod Aston Martin. We dig it, a lot. The styling is massively different than a One-77 from front to back, as Aston has gone over every surface of this car. Our favorite highlights include the round headlights, Vulcan-inspired taillights, and boattail rear with its massive, upturned spoiler. It walks the Aston line of being beautiful and aggressive at the same time, with the emphasis on aggression in this build. The paint is called Pentland Green, and it’s complemented by a whole lot of satin carbon fiber.

The carbon-fiber monocoque chassis is adapted from the One-77. However, the new carbon-fiber body weighs less than that of the original One-77. Under the sculpted hood sits a 7.3-liter V12. It’s also from a One-77, but it’s been heavily breathed upon by Cosworth. Output is bumped up to 836 horsepower and 606 pound-feet of torque, increases of 86 and 53 respectively. And then there’s the transmission. Aston converted it to a genuine three-pedal six-speed manual. The gearbox comes courtesy of Graziano. It requires new twin coolers to handle the heat and a motorsport clutch to handle the torque. 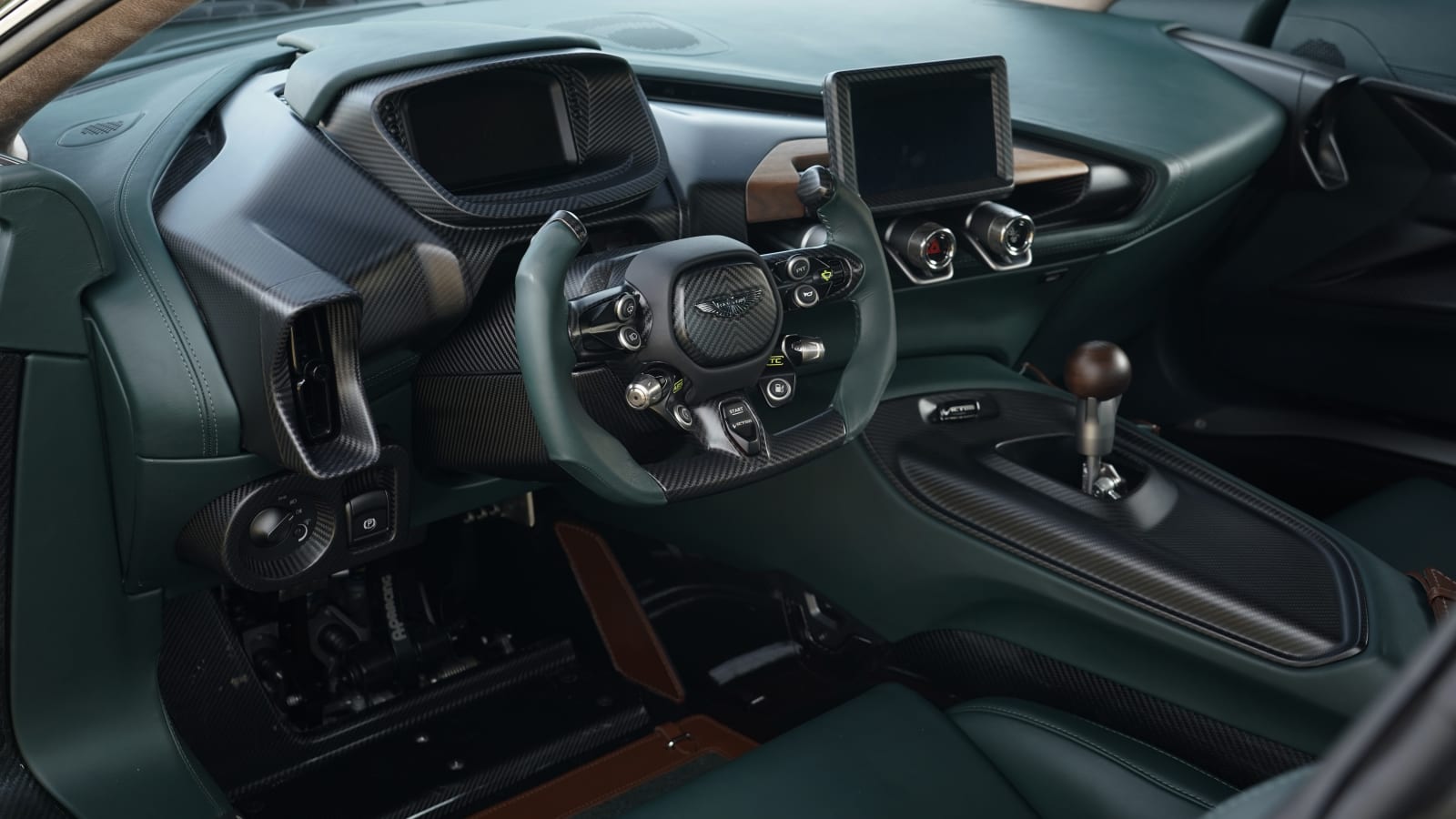 Shifting is done with a solid walnut knob, and it’s simply beautiful. Forest Green “Conker Bridge of Weir” leather covers the cabin where you don’t see exposed carbon fiber. Cashmere is used for the headliner, while anodized aluminum and polished titanium serve in concert with walnut wood for the interior trim. Yeah, it was probably extremely expensive.

This car should handle spectacularly well, too. It uses the same inboard dampers and springs as the Vulcan, allowing for six settings of aggression. Aston says it was tuned to ride well on the street in addition to a racetrack — after all, it is road legal. Center-lock wheels are fitted, and six-piston Brembo brakes with carbon-ceramic rotors sit within them. Aston says it produces even more downforce than a Vantage GT4 racecar, so it’s a serious track monster.

We don’t know how much it costs, but whoever commissioned the build is certainly extravagantly rich.

Autoblog may receive a share from purchases made via links on this page. Pricing and availability is subject to change. Growing up taking...
Read more

Fauci says comments in Trump ad used ‘without my permission’

Dr. Anthony Fauci, Director of the National Institute for Allergy and Infectious Diseases testifies at a House Subcommittee on the Coronavirus Crisis hearing...
Read more

We got a truckload of information on the 2021 Ford F-150 when it was unveiled a few months ago. But Ford left out...
Read more

Peter Endig | AFP | Getty ImagesAmazon on Thursday released comprehensive data into the spread of the coronavirus among its employees, disclosing for...
Read more
TOP NEWS

Trump to block U.S. downloads of TikTok, WeChat on Sunday

Apple has quietly dropped 22% from its peak, giving up $500 billion in market cap

Well, that was fast.It took just 12 trading sessions for Apple to plunge more than 20% from its all-time high, shedding over half...
Read more
WORLD NEWS

Job creation in August represents continued improvement in the U.S. economy but a full recovery won't happen until the coronavirus pandemic is under...
Read more

U.S. President Donald Trump waves prior to boarding Air Force One as he departs Washington for campaign travel to Minnesota at Joint Base...
Read more
BUSINESS

The coronavirus has infected more than 26 million people around the world so far, killing at least 863,500 people. Source link
Read more
BUSINESS

Liu Yifei stars in Disney's "Mulan."DisneyFor months, "Tenet" and "Mulan" have been the center of Hollywood's attention. The films from Warner Bros. and Disney,...
Read more

Talkspace co-founders Roni and Oren FrankTalkspaceTalkspace, an online therapy provider, is seeing unprecedented demand for its service as the coronavirus pandemic drags on,...
Read more
TECH

Google Maps Covid-19 overlayGoogleGoogle on Wednesday announced a new feature in Google Maps that will show you how many Covid-19 cases there are in...
Read more
TECH