“Dirt 5” is the latest installment in the Dirt video game series. It’s one of the best-known and respected off-road racing game franchises, having been around since 2007 and spawning a more serious, rally-focused spinoff in “Dirt Rally.” As such, it has quite a reputation to uphold. In an effort to do so, the game features an enormous selection of vehicles ranging from rally cars to high-powered rock crawlers, and picturesque locations coated in wild dynamic weather. It also takes a significantly more arcade-y tack than its predecessors. We found a lot to enjoy in the game, but as you’ll see below, we can’t yet recommend picking it up due to a laundry list of bugs and glitches. These will probably be fixed in updates to come, but will be enormously frustrating for early adopters. 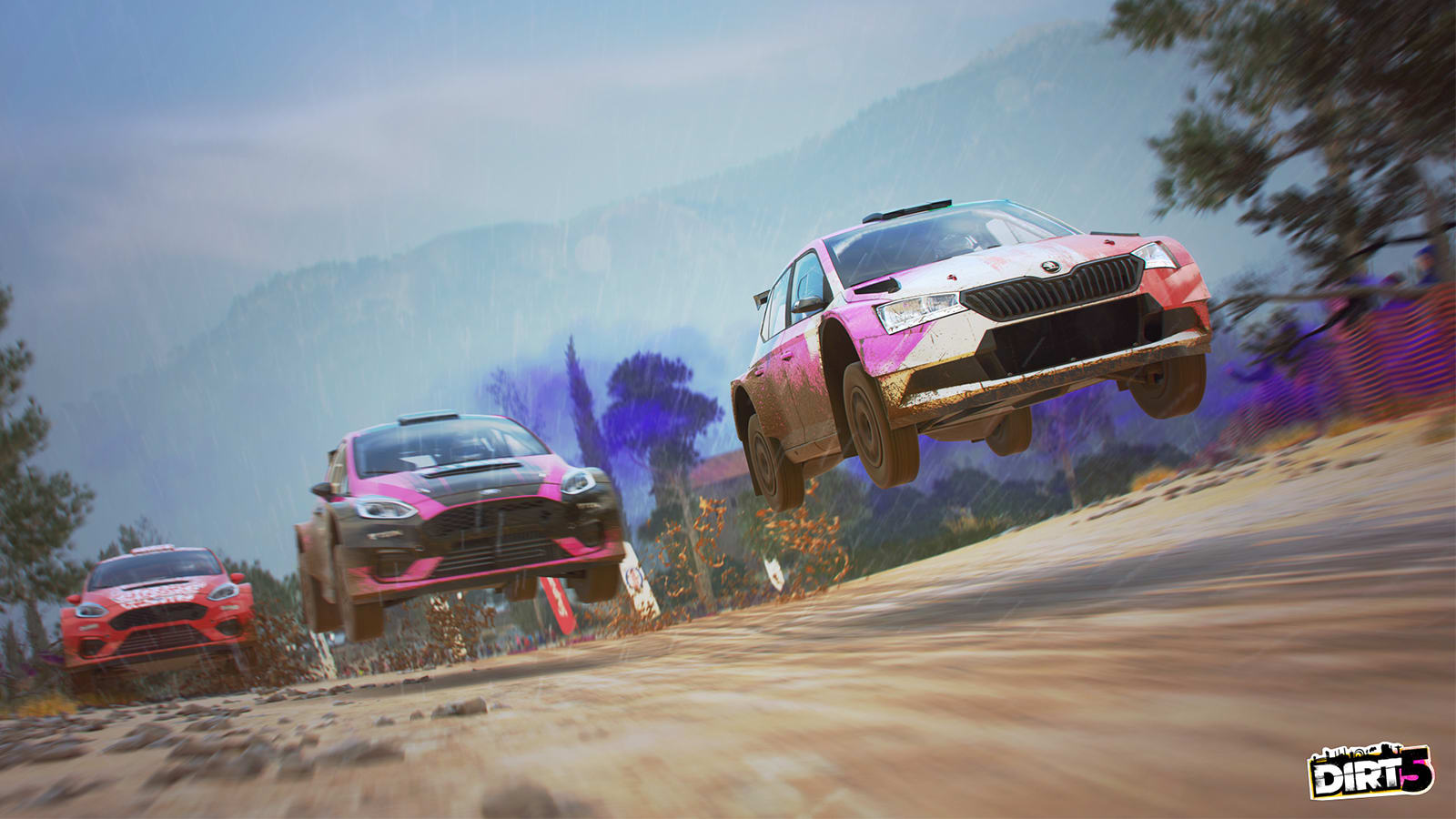 News Editor Joel Stocksdale: I had high hopes for “Dirt 5.” The series has been consistently good, even up to last year’s “Dirt Rally 2.0.” And I was excited to play one of the numbered Dirt games with a wider array of vehicles and racing types. And the early copy I was playing on my plain PlayStation 4 (not a slim, not a Pro) was generally living up to expectations. It’s extremely pretty with detailed cars, environments, long draw distances and excellent lighting and particle effects. The physics are a bit more arcade-y than I expected, feeling closer to something like Sega Rally than Dirt Rally, but that means it’s easy to pick up and play and not nearly as punishing as more serious simulation games. The different environments and cars all feel distinct and interesting, too. You’ll be able to tell when you hit icy or wet patches and whether you’re driving a heavy four-wheel-drive trophy truck or a slippery classic rear-drive rally car. There are some fun, unexpected cars included, too, like the VW ID. Buggy and 1967 Ford Mustang. The career is the meat of the game and features a bit of a story relayed by folks from Donut Media and famed video game voice actors Troy Baker and Nolan North. It’s not a particularly interesting story, but they tried. More importantly, there are a nice selection of events to work through, and you can work your way around events you don’t like. I avoided sprint car races like the pandemic. That’s the one race type that I think needs its own tutorial.

Not everything was perfect, though. It’s a bit disappointing that you can’t do any kind of fine tuning to your vehicles. Every car has its own settings for gearing, suspension and torque distribution, and they can’t be changed. There are a number of cars I’d like to play with more, but don’t because I can’t drive them well to start with, and there’s nothing I can change to make them easier to handle. The livery and driver tag customization are a bit disappointing, too. The vinyl application system is rudimentary compared with most other modern racing games, and it’s further hampered by having to unlock patterns and paint styles through the career mode. So you might not be able to get your car just right until close to the end of the career mode.

And then there’s the bugs. Both Erik and I encountered loads of them. At first I seemed to be better off. I would run across some strange glitches now and then, such as textures that didn’t load fast enough, some odd sky effects and occasional screen tearing. I chalked these up to the game being a slightly early release, and any updates would fix them. An update came through earlier this week, and after installing and starting up the game, there did seem to be a graphics improvement. Unfortunately, a game breaking bug had been introduced. Anytime I tried to create a custom paint scheme for a car — any car, with any color — the game would crash to the console menu and erase all progress. I repeated this multiple times to make sure it wasn’t some really obscure thing. I never want to play the tutorial race again. Erik ran into some serious issues, too, as you’ll see below.

I think “Dirt 5” will eventually be worth picking up, but wait a while for some more patches to be introduced. You’ll just be frustrated otherwise. 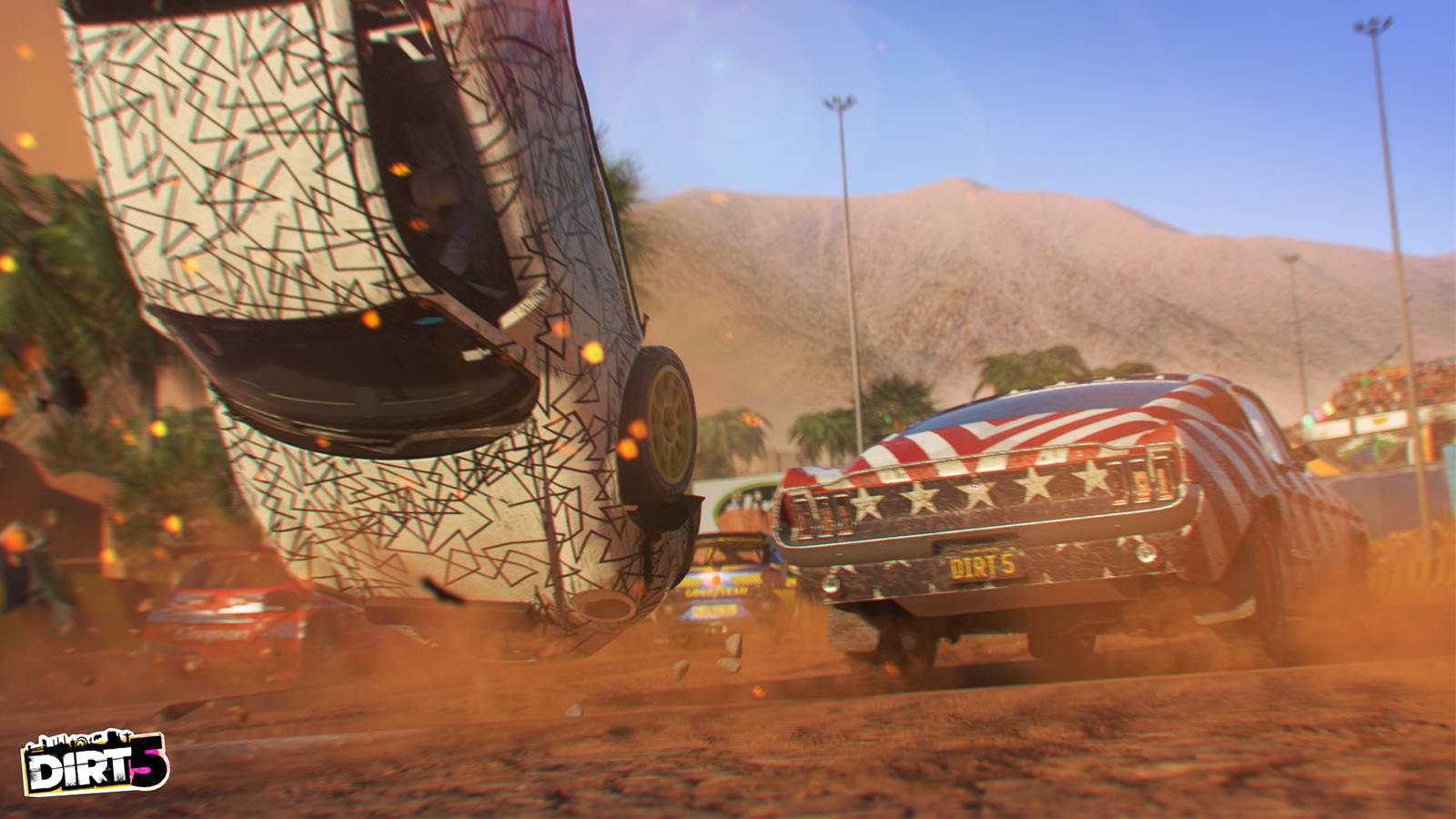 Multimedia Producer Erik Maier: I’ve been excited for “Dirt 5” for what feels like forever. It seemed like a game that was basically made for me. I’m a sucker for anything arcade-y and drift-y. Even the logo aesthetic had me excited! It was colorful, it just looked “fun.” I finally had the chance to boot it up and heard New Found Glory’s “Hit or Miss,” a now 21-year-old pop punk banger and absolute anthem of my youth. I couldn’t believe it. Everything seemed to be coming together to make this the game I had been waiting for. Until everything started going wrong.

I played this game on an Xbox One S, so my experience is hopefully unique to that console, but unfortunately, there’s just no way I can recommend this game for anyone at all on an Xbox in its current state. The version(s) of the game that I tested up to the point of this writing have been utterly broken. There are truly outrageous graphical glitches on every track, even a few that I’d worry could cause epileptic seizures for sensitive players. The nameplates above the cars while racing are so pixelated they serve literally no purpose. Textures pop in and out so often it’s enough to make your head spin. After downloading an update, things somehow got even worse. I could no longer hear any audio at all in the menus, including narrator dialogue, and no music at all in any part of the game. It was just … gone. Even more than that, the game totally froze or crashed twice in the span of a two-hour livestream.

This game undoubtedly has a fun core, and I’m sure it looks fine when it’s running properly, but unfortunately, on an Xbox One S, it’s currently broken to the point of being unplayable. I empathize with the developers here. I’m sure this isn’t how they want their work to be presented, and I’m sure that this is simply a product of the game being rushed, most likely for the release of the Playstation 5 and Xbox Series X. If it was undercooked to the point of a lightly seared salmon I might be able to be more forgiving, but this is sushi.

We haven’t heard anything yet, but I can only imagine they’ll be releasing another patch (or 10) for this game in the coming weeks. I won’t be contributing any more time to the game in its current version, but if and when it gets patched further, I’m definitely looking forward to jumping back in and giving it another real go when it’s in a more presentable state. You can read my evolving thoughts in our Gaming Roundup posts every Friday if you’re interested. I can see how a more stable version of this game would be a blast, but as-is, on an Xbox One S, there are way too many cockroach-sized bugs left to squash.

what it means for US and China

The largest container vessel in the world, the HMM Algeciras is moored at the Amaliaport of Rotterdam.BSR Agency | Getty Images News |...

Results of a private survey on Tuesday showed China's manufacturing activity expanded in August at the fastest pace in nearly a decade.The Caixin/Markit...

Rolls-Royce GhostRolls-RoyceThe chief executive of British luxury car-maker Rolls-Royce has said demand is returning to normal as the company launched a new vehicle...

Runoffs are too close to call

A sign is seen as voters line up for the U.S. Senate run-off election, at a polling location in Marietta, Georgia, U.S., January...

Green Bay ‘on the verge of a crisis’

Jeff Bezos to step down as Amazon CEO, Andy Jassy to take over in Q3

Qualcomm sued over alleged anti-competitive behavior in the UK

Evergrande’s electric car unit gets funding to compete with Tesla, Nio in China