Registrations of electrified cars overtook those of diesel in Europe for the first time ever in September, marking a significant milestone in diesel’s decline from its dominance of just a decade ago. Electrified cars made up slightly more than 25% of new registrations reported for the month, beating out diesels (24.8%) by the thinnest of margins, but surpassing them nonetheless.

New diesel registrations have been declining across Europe since 2012, when they represented more than 50% of the new-car market according to a study by JATO Dynamics, which has been tracking automotive sales trends for more than three decades.

“The shift from ICEs to EVs is finally taking place. Although this is largely down to government policies and incentives, consumers are also now ready to adopt these new technologies,” said JATO analyst Felipe Munoz. 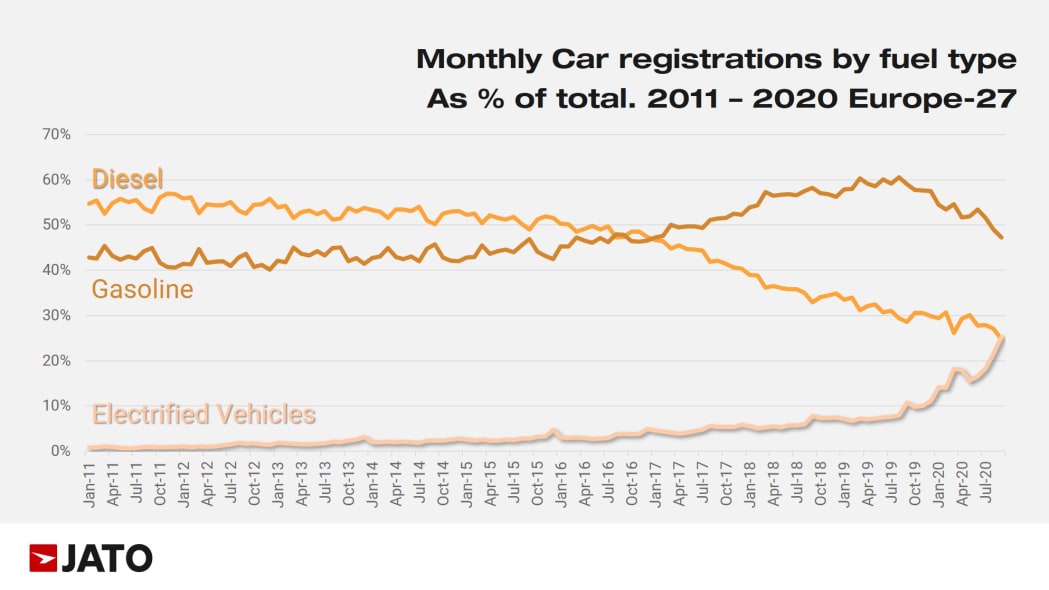 “Demand for gasoline and diesel cars shows double-digit drops compared to September 2019 while the volume of EVs increased by 139% to 327,800 units — a record in terms of both volume and market share. This is the first time that EVs have broken the 300,000 units monthly mark, and only the second time that they have counted for more than 20% of registrations,” JATO’s report said.

While this is a win for electrification, the trends show that the clear post-Dieselgate winner is the old-fashioned gasoline engine, which still holds on to 47% of the European new-vehicle market, but even that is down from the approximately 60% share it held just a year ago. Sales of new vehicles were up 1 percent over 2019 in September as Europe, like others, continues to work its way out of its COVID recession.

At Elite Medical Centers, Even Workers Who Don’t Qualify Are Vaccinated. Administrators and young graduate students have been inoculated at leading research hospitals, contrary...

Sheila Bair, former Chair of the FDIC.Adam Jeffery | CNBCTo his critics, President Trump has an annoying habit of being right at times....
Read more

On a Tuesday morning back in June, a 2020 Porsche 911 Carrera S effectively fell into my lap. “Hey man. Last-second 911 Carrera...
Read more

Study says these 4 vitamins could decrease your covid risk

US President Donald Trump speaks to the media as he makes his way to board Air Force One before departing from Andrews Air...
Read more
TOP NEWS

A pedestrian wearing a face mask looks at a smartphone while passing in front of the New York Stock Exchange (NYSE) in New...
Read more
WORLD NEWS

SINGAPORE — Stocks in Japan were set to trade lower at the open after shares on Wall Street pulled back overnight from all-time...
Read more

How Michelin-starred o.d.o. by Odo is reopening in New York

When o.d.o. by Odo reopens its dining room for the first time in more than six months on Wednesday evening, the 14-seat chef's...
Read more
BUSINESS

CVS Health reported a better-than-expected 3.5% jump in third-quarter revenue and raised its 2020 earnings guidance on Friday as its plan to remake...
Read more
BUSINESS

Shoppers turn toward premium foods instead of staples, amid Covid rise

CNBC's Jim Cramer said Tuesday that Alphabet would go from a "buy" to a "strong buy" if the government's expected antitrust lawsuit against...
Read more
TECH