Summer is the deadliest season for American drivers, and Labor Day is the third deadliest holiday overall on U.S. roads, a study cautions. In a typical year, more than 440 fatal crashes will occur over the end-of-summer holiday.

The study conducted by AutoInsurance.org looked at road fatalities on all major U.S. holidays between 2016 and 2018. During that period, Labor Day was the third deadliest holiday behind Memorial Day at #2 and Independence Day at #1. There were 1,349 fatal crashes reported over the Fourth of July holidays, averaging out to just under 450 fatal incidents per year. Labor Day checks in at an average of 443.

Though pandemic-related closures and restrictions continue to cycle in and out around the country, Labor Day is still expected to be a high-traffic weekend on America’s highways. While the sheer volume of travelers does contribute to the total number of fatal accidents, the study suggests that drivers who have done too much celebrating are more likely to be involved when somebody dies in a car crash. 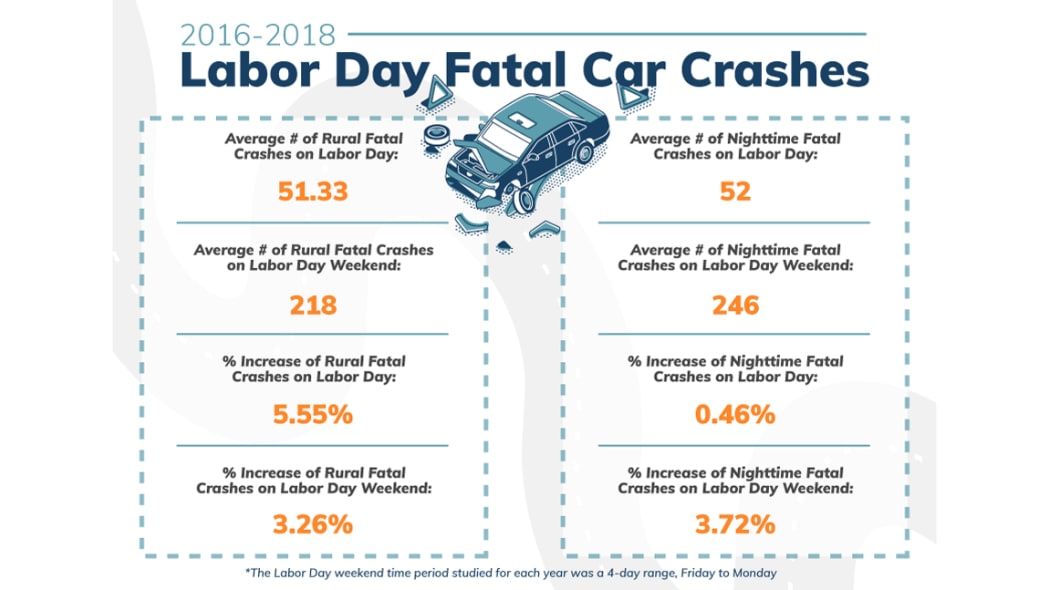 “During the first wave of the coronavirus pandemic, we saw a substantial decrease in fatal crashes on our nation’s roadways as folks quarantined at home and traveled less. This decrease was especially true given that drunk driving dropped during COVID-19,” the study summary said.

“This rise will be especially felt during the upcoming Labor Day weekend, a time when traffic fatalities, especially drunk driving-related deaths, are historically high,” it continued. “After being cooped up at home for the past few months, we imagine this Labor Day will bring many people out to party at the nation’s beaches, parks, and other hotspots, even as the World Health Organization and other agencies recommend continued social distancing.”

The safest holiday for American drivers? Oddly enough, it’s Christmas. The study concluded that almost 35% more fatal crashes occur over the major summer holidays than on either Christmas or New Year’s.

Digital artist Beeple is "a rich man" after his non-fungible token sold for nearly $70 million at auction, Noah Davis, a postwar and contemporary...

A test tube labelled vaccine is seen in front of AstraZeneca logo in this illustration taken, September 9, 2020.Dado Ruvic | ReutersLONDON —...

KAMPALA, Uganda — The women grappled with each other inside the vehicle. The driver jerked to ease the grip around her neck, then...

New York Governor Andrew Cuomo speaks during a daily briefing following the outbreak of the coronavirus disease (COVID-19) in Manhattan in New York...

Russia and China look to deepen ties on the moon

‘Every single one of them has gone up’

Amazon to create 10,000 new permanent jobs in U.K. this year

Milan’s skyline to add another ‘mutant building’ covered in plants

Experts question if it can ever make A.I. human-like