Vans are generally boring things. Oh, you can spray paint sexy, psychedelic valkryies on the side or buy some right-hand-steer Japanese import with a name like Sambar Try Dias, but by and large, they’re boring. That goes triple for the minivan variety, but since their invention in the early 1980s, one minivan has been the obvious exception. There was and continues to be absolutely nothing boring about the Toyota Previa. In fact, it’s one of the most interesting vehicles Toyota has sold in this country in the past 30 years.

Early minivans were less cookie cutter in shape and layout than they are today, but even by that standard, the Previa was different. For starters, just look at the thing as it balloons above its tiny wheels and lower cladding. I imagine its design language was nouveaux blimp. There’s so much glass! Just look at those windshield wipers. And remember, the Dodge Caravan looked like this when the Previa came out … and Chrysler had just redesigned them. Yet, the styling is just the tip of the wacky pants iceberg.

You want weird? Try a mid-engine minivan. Lurking below the front seats is a 2.4-liter inline-four placed on its side at a 75-degree angle. This location allowed for more interior space while also evening out weight distribution and lowering the center of gravity. You know, just like a Porsche Cayman. The capsized four banger sent its 138 horsepower to the rear wheels. Let that sink in for a moment: a rear-wheel-drive minivan that wasn’t a Ford Aerostar or Chevy Astro, which weren’t exactly minivans anyway. 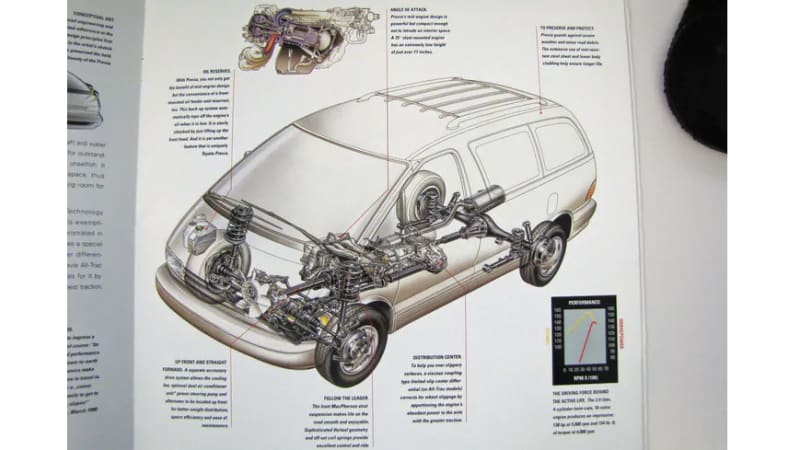 Alas, it gets better. The Previa came standard with a five-speed manual transmission! Who would buy such a thing? Well, someone did, because the one you see here is up for online auction right now on Cars and Bids.com. Not only does it have the manual, but it has only 68,000 miles on it and seems to be in perfectly nice shape for a 27-year-old minivan.

Now, if you’re thinking that 138 horsepower and 154 pound-feet of torque aren’t a lot for a vehicle that weighed 3,745 pounds, you’d be absolutely correct. A 2020 Toyota RAV4 has 203 horsepower, weighs only 3,370 pounds and still can’t crack 8 seconds from zero to 60 mph. Being able to row your own probably wouldn’t have helped much, but then, it definitely wouldn’t have hurt. Opting for the all-wheel drive system definitely would have, though. Now, if you thinking that such a small engine would mean the Previa was fuel efficient, you’d be absolutely wrong. By today’s EPA fuel economy calculations, it would have got 17 mpg combined. The V6-powered Chrysler vans were actually a bit better. Of course, it was the ’90s, so no one cared.

Since the engine placement made a V6 impossible, Toyota added a supercharger as an option for 1994 that bumped power to 161 horses. Sadly, that year also saw the manual dropped, making this van on Cars and Bids an even rarer find. 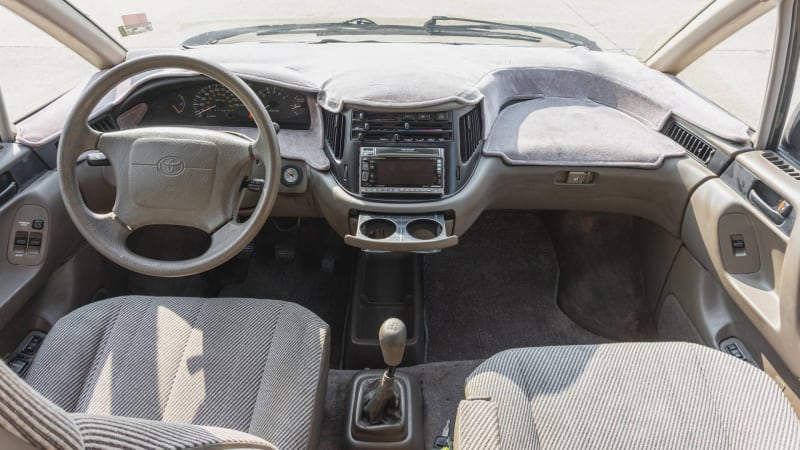 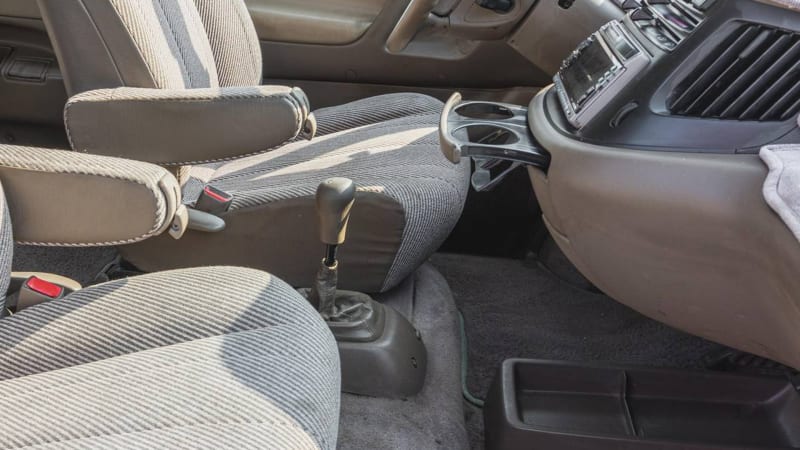 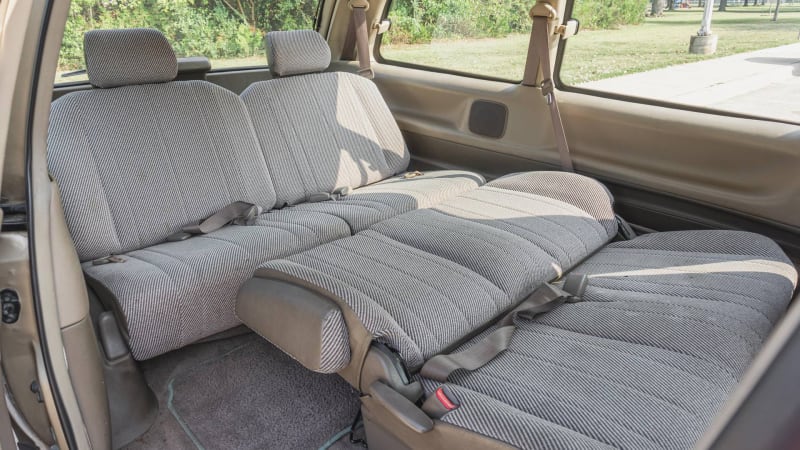 Unfortunately, this example doesn’t have the second-row captain’s chairs (a rarity in minivans in those days), but its center bench does fold back to create a bed-like surface with the third row. Speaking of which, the third row was also unique for the time. Although the second-generation Honda Odyssey was the first minivan to have the now-ubiquitous third row design that disappeared into the floor, the Previa’s at least swung up laterally against the cargo area walls like those on today’s Toyota Land Cruiser. This is in contrast to the third rows of other vans where you’d have to call up Terry Crews and ask him to hoist out what I can only imagine weighed 400 pounds. (To be fair, the GM Dustbuster vans had five individual seats that could be physically removed, but those are for a different post about weirdo vans).

I haven’t even touched on the rest of the interior. There’s the dual cowl dashboard with its shelf-like area in front of the passenger and center stack control pod that juts into the cabin. Again, the redesigned Dodge Caravan of the time looked like this. Beyond the dash is an unencumbered, panoramic view thanks to thin pillars, all that glass and the engine being under you instead of out front. You could get a panoramic sunroof and rear air conditioning years before they became commonplace. Even the front seats are interesting in appearance.

I’m telling you, this thing is cool. OK, maybe “interesting” is the better word. But if it wasn’t painted this oh-so-Toyota shade of beige, and was instead this, well, then we’d be talking. Nevertheless, if you’re looking for a unique and well-kept choice to live your best #vanlife, I can think of few that would be better. Most important, it would let you go around telling people you drive something from the ’90s that’s mid-engine, rear-wheel drive and blessed with a manual transmission. Your friends will surely think Ferrari F355 or Acura NSX. They’d be wrong, but the truth is actually far more interesting.

Longmont man says vaccine appointment canceled due to medical debt. A 72-year old Longmont man was ready to get his vaccine until a phone...

Judy Shelton's controversial nomination to the Federal Reserve suffered a possibly fatal blow Tuesday in a key procedural vote in the Senate.The upper...

Democratic 2020 U.S. presidential nominee Joe Biden, his son Hunter and his wife Jill celebrate onstage at his election rally, after the news...

My Pillow CEO Michael Lindell is seen outside the door of the West Wing at the White House on Friday, Jan 15, 2021...

‘This is already in the U.S.,’ says Dr. Gottlieb