Uber And Lyft Will Give Free Rides To COVID-19 Vaccination...

Some of the world’s largest vaccine-makers hope to bolster public confidence in a yet-to-arrive COVID-19 vaccine, pledging to follow strict safety protocols in the rush to respond to the pandemic. Here, a nurse practitioner administers a dose of flu vaccine in Key Biscayne, Fla. 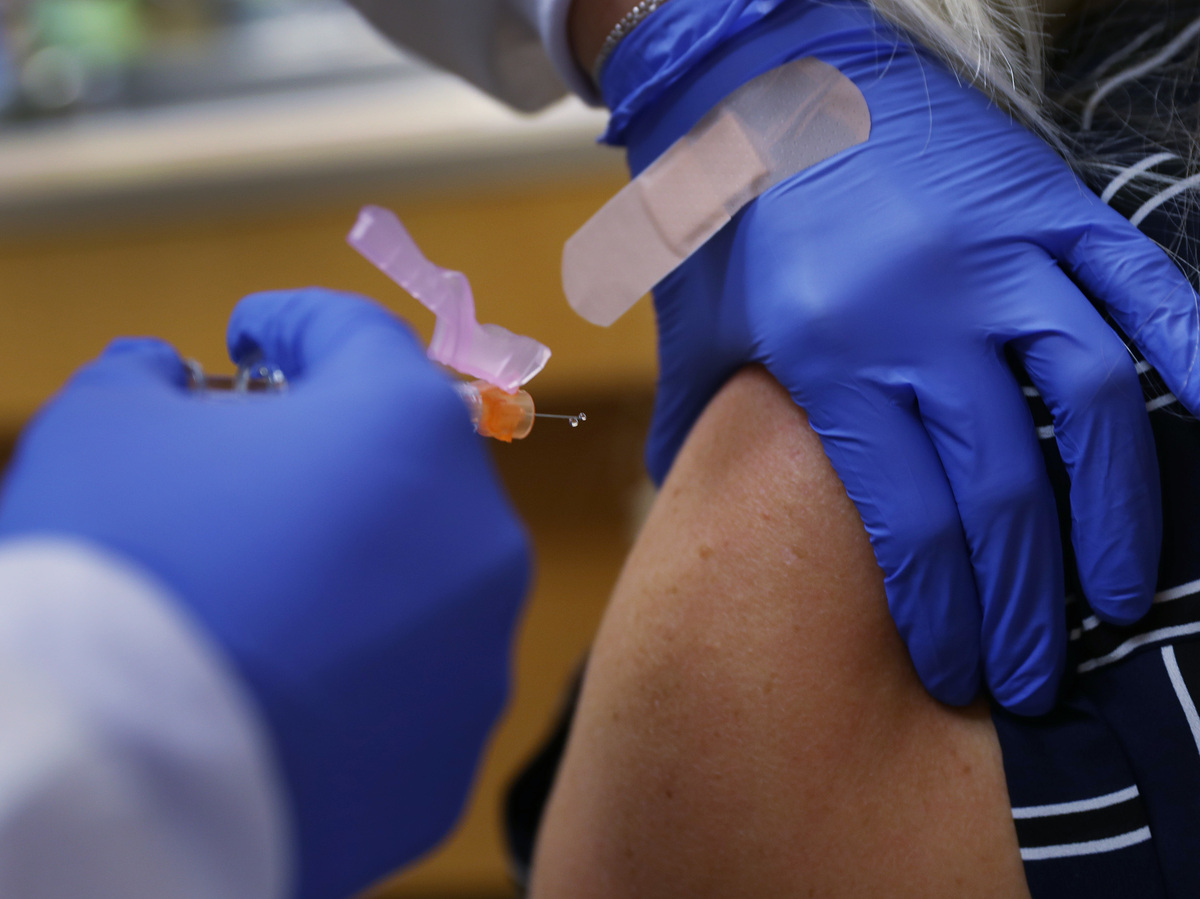 Some of the world’s largest vaccine-makers hope to bolster public confidence in a yet-to-arrive COVID-19 vaccine, pledging to follow strict safety protocols in the rush to respond to the pandemic. Here, a nurse practitioner administers a dose of flu vaccine in Key Biscayne, Fla.

Nine drug companies pledged Tuesday that they will not submit vaccine candidates for FDA review until their safety and efficacy is shown in large clinical trials. The move is intended to bolster public confidence amid the rush to make a COVID-19 vaccine widely available, and counter fears of political pressure to have a vaccine before the November presidential election.

The CEOs of AstraZeneca, Moderna and Pfizer are among those who signed the pledge to follow “high ethical standards and sound scientific principles.” All three companies are conducting large studies of potential vaccines for the disease that has killed nearly 200,000 people in the U.S. and nearly 900,000 worldwide. The other biopharmaceutical companies are Johnson & Johnson, GlaxoSmithKline, Merck, Novavax, BioNTech and Sanofi.

Pfizer CEO Albert Bourla, in an interview on the Today show, called the pledge historic.

The declaration comes one month after a survey found that only 2 in 5 people in the U.S. said they planned to get vaccinated against COVID-19 if and when a vaccine becomes available. That YouGov survey found that a third of Americans were unsure whether they would get the vaccine.

On Sunday, President Trump told a White House news conference that a “very safe and very effective” vaccine is “going to be done in a very short of period of time. Could even have it during the month of October.”

The Centers for Disease Control and Prevention told states last week to prepare to distribute a potential coronavirus vaccine as soon as late October.

But in an interview with NPR, Dr. Moncef Slaoui, the chief scientific adviser to the Trump administration’s coronavirus vaccine development program, Operation Warp Speed, called it “extremely unlikely” that a vaccine will be ready by then.

“There is a very, very low chance that the trials that are running as we speak” could be ready before the end of October, Slaoui said.

“And therefore, there could be — if all other conditions required for an Emergency Use Authorization are met — an approval. I think it’s extremely unlikely but not impossible. And therefore, it’s the right thing to do, to be prepared in case.”

Many top U.S. health officials, including infectious disease expert Dr. Anthony Fauci, have repeatedly said they hope that a coronavirus vaccine could be ready for distribution by early next year.

Last month, President Trump cited a “deep state” conspiracy theory when he accused the Food and Drug Administration, without evidence, of stalling work on an answer to the global pandemic to hamper his reelection chances.

“The deep state, or whoever, over at the FDA is making it very difficult for drug companies to get people in order to test the vaccines and therapeutics,” Trump stated via Twitter. “Obviously, they are hoping to delay the answer until after November 3rd. Must focus on speed, and saving lives!”

The deep state, or whoever, over at the FDA is making it very difficult for drug companies to get people in order to test the vaccines and therapeutics. Obviously, they are hoping to delay the answer until after November 3rd. Must focus on speed, and saving lives! @SteveFDA

Vaccines, tests and treatments for the coronavirus and COVID-19 that are being tested in the U.S. can be found on the government website ClinicalTrials.gov.

By making the pledge, the companies also promise that their work, and any vaccine that emerges, will aim to reach diverse populations. The signatories say they will work “to ensure a sufficient supply and range of vaccine options, including those suitable for global access.”

The issue of vaccine availability has become a hot topic for global health experts such as WHO Director-General Tedros Adhanom Ghebreyesus, who has urged countries to resist “vaccine nationalism” and join the COVAX Global Vaccines Facility — an international agreement meant to ensure wide access to a COVID-19 vaccine.

Last week, the Trump administration said the U.S. will not be part of that global pact.

As of Tuesday, more than 27.3 million coronavirus infections had been reported globally, according to data compiled by Johns Hopkins University. The U.S. has reported 6.3 million cases, the most in the world. India is second with nearly 4.3 million reported cases.

Residents undergo a free rapid antigen nasopharyngeal swab test for Covid-19 at a testing facility set up in a school sports hall, on...

Billionaire Ray Dalio explains how to invest in China

SINGAPORE — Many investors have cut their exposure to China in 2020. But one billionaire hedge fund manager has a strategy that begins...

Just a reminder, and let’s make this a wide spread one.

WILMINGTON, DELAWARE - NOVEMBER 16: U.S. President-elect Joe Biden delivers remarks about the U.S. economy during a press briefing at the Queen...

Sign advertising apartments for rent in the Upper East Side in New York City.Adam Jeffery | CNBCManhattan real estate may be turning the...

People will ‘try to kill us,’ says GOP lawmaker on going against Trump

As city centers become more congested, one CEO has a solution

WHO outlines Wuhan findings on origins of Covid pandemic

The Mall of America no longer delinquent on $1.4 billion mortgage

California tech boom got it through Covid crisis, flight risk is real