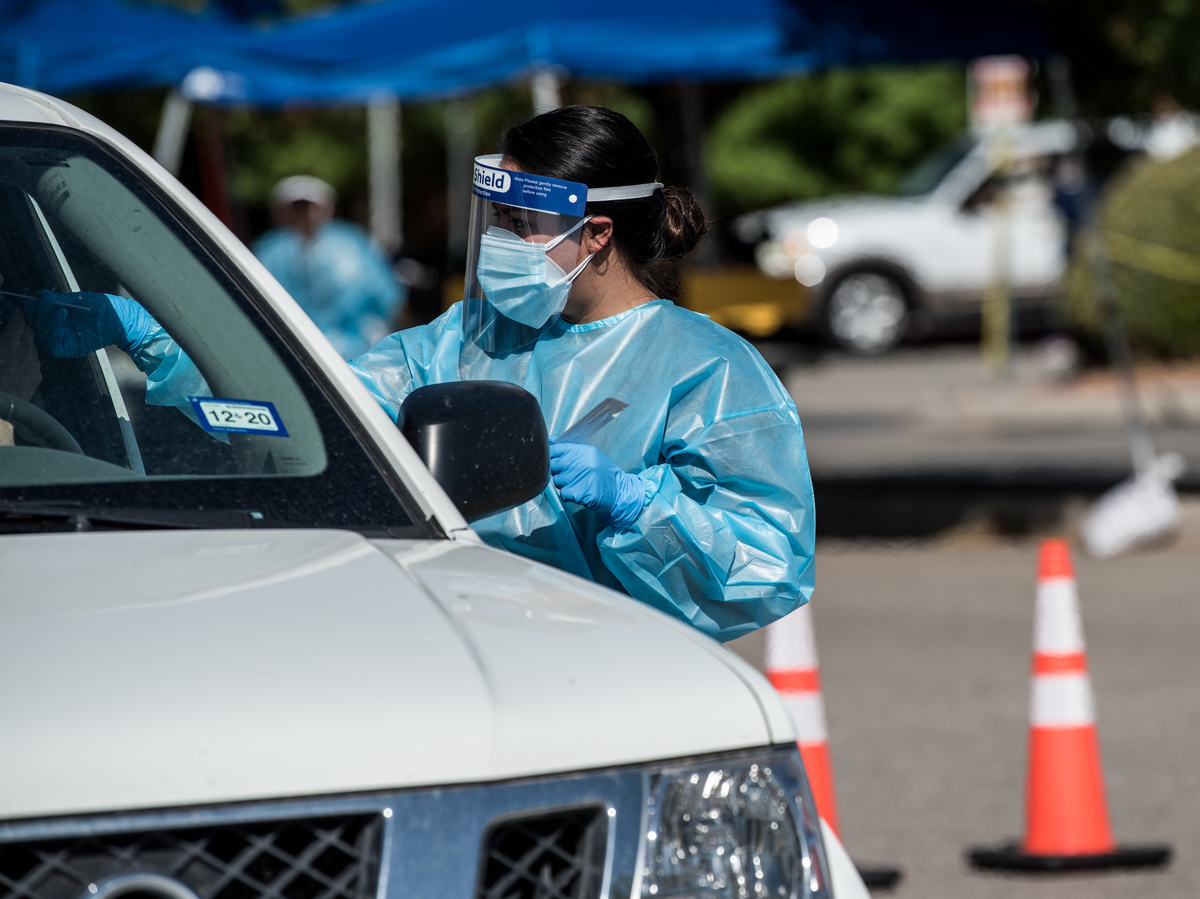 A dramatic upswing in COVID-19 cases and positivity rates in El Paso, Texas, has led officials to ask residents to stay at home for two weeks and to impose a mandatory countywide curfew.

Dr. Ogechika Alozie, chief medical officer of the Del Sol Medical Center in El Paso, told NPR’s Morning Edition that as you walk through the ICU “it hits you just how surreal and how strange this is.”

“A lot of people just assume that when you walk into an ICU, that it’ll be loud and the hustle and bustle,” Alozie said. “But the nurses and the physicians and the teams are just going about their business.”

“We’re used to being in the ICU,” he continued. “But having this many patients in the ICU, paralyzed and prone, and truly knowing that there’s a large number of them that over the course of time are going to be added to that human tragedy count is really unsettling.”

This week, Texas has seen an average of 6,122 new cases per day, up from 4,149 just two weeks ago. Since the beginning of the pandemic, at least 911,835 people in the state have tested positive and 18,162 people have died from the virus, making Texas the state with the most COVID-19 deaths in the country.

In his statement ordering the curfew, El Paso County Judge Ricardo Samaniego said that there has been a 160% increase in positive rate and 300% increase in hospitalizations in the last three weeks.

In excerpts from his interview, Alozie, who is also co-chair of the El Paso COVID-19 task force, discusses the surge in cases, the patients who are struggling and what the local response has been.

Is there a patient or a certain story that stands out to you in recent days that you just can’t get out of your mind?

The one that haunts me the most, I think, is something that, for us, happened over the weekend. One of the nurses was trying to get a patient settled and told me as she was breaking down — because the toll is a lot — about this 50-year-old gentleman that had come in, had been engaged in a family gathering and was now in our ICU struggling for breath. And before they intubated him, he said, “Hey, can I have a cup of Sprite?” And they were giving him the Sprite, knowing that this very well could be his last cup of Sprite that he’ll ever have because he was really sick. And so I think for me, that’s been the one that had punched me in the gut the most.

It sounds like you saw this coming — the potential of a second spike — but didn’t think it would happen this early in the year. Why do you think we’re seeing this spike now?

From an [epidemiological] standpoint, infectious disease standpoint, understanding the dynamics of the virus, it was always expected that the fall would be a troublesome time. I think for our community, it sort of caught us by surprise. We had struggled through the July, August time period. We had gone down. We had positivity rates as low as 4.5% early in September, and the city was really rejoicing over that. And I think what happened is that as a community, we let down our guard. And whether parts of it is Juárez, [Mexico], which is our neighbor sister city, is experiencing the same spike, and traffic to Juárez is only down about 25% to 30% year over year. I think multigenerational homes that we have, a lot of family gatherings, and if you look sort of globally at the population dynamics for El Paso, one of our zip codes, 79938, is actually one of the most populous zip codes in America. And that layer on top, just a city that has some health care, co-morbid conditions, specifically diabetes, that just make combating coronavirus difficult.

There is a curfew now. People are being told to stay home for the next few weeks. What is your advice to residents of your community in the coming days and weeks?

We as a community are going to need to find a way to get through this. I understand the discourse that has been around mask versus no mask, [and] stay at home versus not stay at home. But at the end of the day … politics and policy are not going to save a community. The individuals in the community have to do the due diligence and really take care of themselves and their families to get through this. I implore everybody: If you don’t need to go out, stay at home.

Lisa Weiner, Dalia Mortada and Ziad Buchh produced and edited the audio version of this story. Christianna Silva adapted for the Web.

The exterior of the headquarters of biotechnology company Biogen in Cambridge, MA is pictured on March 21, 2019.John Tlumacki | Boston Globe |...
Read more

Why China could be key to 5G upgrade ‘supercycle’

GUANGZHOU, China — Apple's iPhone 12 range with 5G connectivity is going to be very important in China and key to achieving what...
Read more
TOP NEWS

Google says it will pay publishers $1 billion for news

A smartphone with the Huawei and 5G network logo is seen on a PC motherboard in this illustration picture taken January 29, 2020.Dado...
Read more

Liu Yifei stars in Disney's "Mulan."DisneyDisney had high hopes that "Mulan" would thrive in China, but the live-action remake of the beloved animated...
Read more
BUSINESS

Studios experiment with release models what that means for film piracy

A photo illustration of pirated music being illegally downloaded with the legal music service iTunes in the background on in London, England.Matthew Lloyd...
Read more
BUSINESS

How to stop Alexa from ruining gift surprises

Dropbox to cut 11% of its global workforce