A COVID Outbreak At The U.S. Embassy In Kabul Has...

Fauci Says Risks From The Delta Variant Underscore The Importance...

Royal Caribbean’s Launch Of Its New Megaship Just Got Sidelined...

The Health Service Executive has been back in touch with advocates about the possibility of establishing a national clinical programme for venous thromboembolism, seven months after the pandemic halted the original discussions, Peter Doyle reports

To mark World Thrombosis Day (WTD) on October 13, campaigners focussed the spotlight on the “often overlooked and misunderstood condition of thrombosis”. Falling each year on the birthday (October 13) of pioneering German physician Rudolf Virchow, who first introduced the concept of thrombosis to medicine, WTD was established to “increase global awareness of thrombosis, including its causes, risk factors, signs/symptoms and evidence-based prevention and treatment”.

“Ultimately, we strive to reduce death and disability caused by the condition,” the WTD website (worldthrombosisday.org) states.

Irish medical practitioners, according to the patient-led charity Thrombosis Ireland (TI), estimated that around 1,900 of these deaths were preventable. The work of the full volunteer organisation, which seeks to promote awareness of thrombosis among patients, medical staff and the general public nationwide, can be seen at https://thrombosis.ie/. Mortality rates, the campaign group said, would improve through better management of the disease and improvements in patient knowledge and awareness of the signs and symptoms of blood clots. The most effective way to achieve this, Consultant Physician at the Acute Medical Unit (AMU) at the University Hospital Limerick (UHL) Prof Michael Watts told Irish Medical Times (IMT), would be via a national clinical programme for thrombosis which would introduce treatment standards for clinicians across Ireland to follow.

An ‘orphaned’ disease
Prof Watts said that for “far too long” VTE has been an “orphaned” disease, without a proper home, and left to languish in the shadow of morbidities with larger public profiles. Speaking to IMT ahead of WTD, Prof Watts added that the third biggest cause of cardiovascular death in Europe was VTE. Prof Watts, who is also Co-Chair of clinician group VTE Ireland, said: “Number one and two are strokes and heart attacks. Both conditions get a lot of airtime, in part thanks to the number of interest groups representing the interests of people diagnosed with associated conditions.”

“Unfortunately, number three on the list, venous thrombosis embolism, doesn’t get the same amount of airtime. It does not get the same amount of investment — and it certainly doesn’t have a national organisation or body in Ireland,” he continued.“It doesn’t really have a natural home despite it being responsible for so many deaths. So, that is one of the main reasons, particularly on World Thrombosis Day, we want to highlight what we regard as an orphaned area in medicine.” 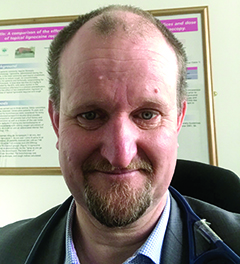 Talks resumption
Prof Watts, a Fellow of the Royal College of Physicians Ireland (RCPI) and the National Clinical Lead for Applications to the Specialist Division of the Register (SDR), also described how talks with the Health Service Executive (HSE) to establish a national clinical lead for VTE have recently restarted more than seven months after the arrival of Covid-19 brought them to a pause.

When the pandemic first took hold in Ireland, senior health officials were redirected to work on the nation’s response to the pandemic and were too busy to continue with their discussions with VTE Ireland and TI. But with studies indicating that hospital patients diagnosed with the highly contagious disease, which had been linked to more than 1,800 deaths in Ireland since the first case in this country was diagnosed in March, were also at high risk of developing thrombosis, the HSE and its Chief Clinical Officer (CCO) Dr Colm Henry had been in contact with Prof Watts and his colleagues with the intention of continuing their discussions which were suspended in February this year owing to Covid-19.

Stickier blood
“What we know of this particular virus is that it makes your blood particularly sticky, perhaps more so than the usual viral infections that come around like influenza,” Prof Watts said.

“Looking at the data that we have, Covid-19 seems to increase the risk of thrombosis three times higher than influenza — it’s not unusual, and we do see this with other type of infections,” he continued.

“The reason for that is infections cause an immune response and that response is inherently tied to the way our blood clot proteins work. 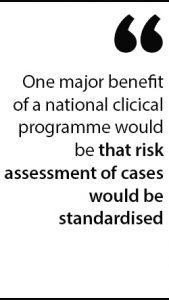 Emphasising how, “in the setting of the Covid”, the risk of increased morbidity and mortality from blood clots was exacerbated, he said these clots were “potentially preventable” — as were around half of the 150,000 clots that killed people every year across Europe. “They are preventable by good medical care, which includes risk assessment for thrombosis, and the prescribing of preventative thrombotic medicines,” Prof Watts said.

A clinical home
Prof Watts said: “Unfortunately, there isn’t a national oversight of VTE prevention or treatment because there isn’t a natural home for VTE. It’s a bit of an orphaned specialty, unfortunately. What Covid is doing now, more than ever, is bringing that situation to the surface.”

Now was the time, he added, for Ireland “to step up to the plate in terms of thrombosis”. “We have decided at VTE Ireland that, because VTE is orphaned, we need a national clinical programme, with the appointment of a national clinical lead,” Prof Watts stated.

“It is the third biggest cardiovascular killer in Europe, and yet it doesn’t have a clinical home (in Ireland). It needs leadership and it needs a national clinical programme and I think the HSE is coming around to this idea.

But the Covid-19 pandemic struck before the talks were finalised and arrangements for a crucial meeting with the CCO, Dr Henry, were placed on the back-burner. Until now.

“It is somewhat ironic that Covid and thrombosis are interlinked and it is through that high risk of thrombosis from Covid that we are now back in communications with the HSE’s Clinical Risk Forum and with Dr Henry about developing a national strategy and the appointment of a clinical lead in thrombosis in Ireland,” explained Prof Watts.

For example, an audit carried out in October 2017 — three years before the outbreak of a new respiratory illness in China would result in the World Health Organization (WHO) declaring the global Covid-19 pandemic — showed that there was a significant risk of VTE with hospital admissions.

As a result of the research carried out by VTE Ireland, in conjunction with the HSE, there was now a clinical risk indicator for HAT in Ireland. “The initial indications from this new measurement shows that since October of last year, there has been a spike in hospital-acquired thrombosis,” he added.

Reporting accurately
But the incidences of HAT could be higher after Dr Watts revealed there were problems with how cases were being recorded on the HSE’s Hospital In-Patient Enquiry (HIPE) system.

“Data is very powerful, but it needs to be reported accurately and if you report it inaccurately you are going to get misled,” he cautioned. One of the “problems”, he said, with DVTs and VTEs was that sometimes people presenting with blood clots do not actually come to hospital at all.

He said the problem was compounded further by patients who were successfully treated in hospital but who later developed blood clots after they were discharged. “The data that the HSE uses, the HIPE system, is all based on hospital admissions, so you can see how there might be a problem,” he said.

“We are going to deal with that, and we have a way of dealing with that.”

One major benefit of a national clinical programme would be that risk assessment of cases would be standardised. “When you come to hospital with a medical illness like stroke or heart attack, your risk of thrombosis is highly significant,” explained Prof Watts. “Scores have now been developed and one of them that we use is called the Padua score and it is simply a way of risk assessing someone in terms of their VTE risk whilst they are in hospital.

“You carry out this risk assessment and then you prescribe preventative medicines where appropriate to prevent clot formation. It has been around for 30 years and it is more important now than ever with Covid on our shores.”

House could move to impeach Trump by next week, top Democrat says

People wearing protective masks hold a U.S. flag at the Barclays Center during the "Get him out! defend democracy" rally, a day after...

LONDON — The U.K. has announced its largest peacetime borrowing level ever as the coronavirus pandemic is forecast to cause the largest plunge...

Walmart is bringing livestream shopping to TikTok on Friday

A line forms outside of the Walmart in Quincy, MA on April 4, 2020 as the store implements new restrictions on capacity during...

How to spend the incoming relief

US and EU need to overcome tensions

Three dead and several wounded after a terror attack in Nice, France

Vaccines are Singapore’s priority but are not silver bullets, minister says

Amazon pushes holiday shoppers to pick up packages at stores

Trump tweets from POTUS handle account, says looking ‘at the possibilities of building out our own platform’