A COVID Outbreak At The U.S. Embassy In Kabul Has...

Fauci Says Risks From The Delta Variant Underscore The Importance...

Royal Caribbean’s Launch Of Its New Megaship Just Got Sidelined...

A man is tested for the coronavirus on Sunday in Košice, Slovakia, as part of a nationwide effort to test nearly everyone over age 10 for the virus. 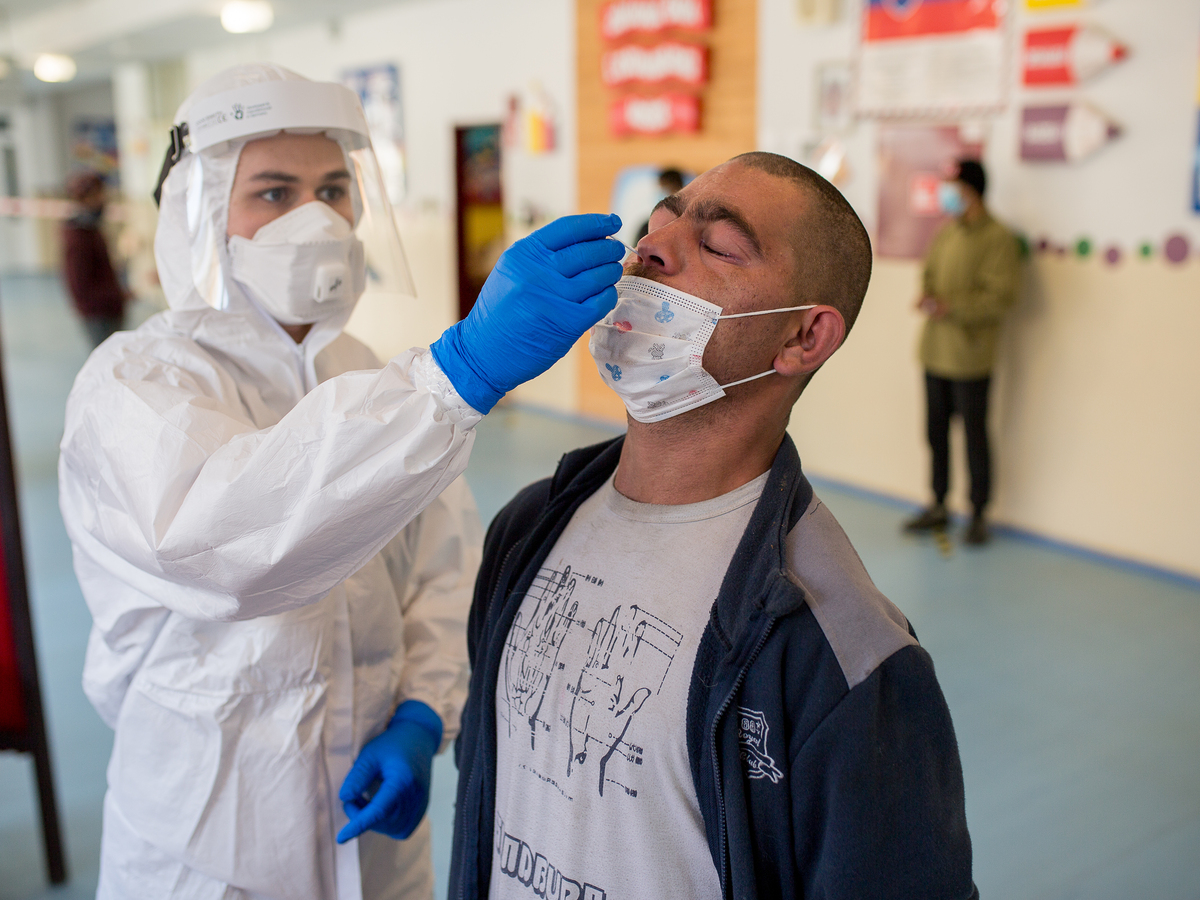 A man is tested for the coronavirus on Sunday in Košice, Slovakia, as part of a nationwide effort to test nearly everyone over age 10 for the virus.

Slovakia undertook a massive effort over the weekend: to test nearly all adults in the country for the coronavirus.

Amid a steep spike in cases, more than 3.6 million Slovaks were tested for the virus, according to Prime Minister Igor Matovic – that’s about two-thirds of the population.

“We have made a great leap forward,” the prime minister, Igor Matovič, told reporters on Monday.

“But we should not think that because of this 1%, now all is fine. It is not,” he added, according to Agence France-Presse. “In reality, up to 2% of our inhabitants might be infected. It is not at all a good situation.”

Two regions of the country with the highest case numbers were tested the previous weekend — a pilot in which 91% of those eligible were tested. In that round of testing, 3.97% were found positive.

More tests are planned for next weekend, but districts with a positive incidence of less than 0.7 percent will be exempt.

Children under 10 are exempt from the tests. Those over 65 who spend much of their time at home, as well as other vulnerable groups, are also exempt.

For all others, the test is optional – but a strict 10-day quarantine is required for those who choose to not get tested, The Lancet reports. Anyone who tests positive must go into strict isolation at home or a state quarantine facility for 10 days. Police officers are doing spot checks during the three-week testing period, and those who have taken the test are given a certificate they can show to police. Those who are found breaking the quarantine or isolation rules can be fined 1650 euros (about $1,920).

One goal of the program is to keep the nation’s hospitals from becoming overwhelmed. Another is to avoid a severe lockdown. Schools have already been ordered to close for a month, amid closings of public venues and restrictions on indoor dining at restaurants.

Matovič said that the government’s scientific advisory team had recommended a three-week lockdown for all, rather than the testing program, but he said a lockdown would cause too much economic pain, according to The Lancet.

Some have been critical of the government’s plan.

Alexandra Brazinova, an epidemiologist at the Medical Faculty of Comenius University in Bratislava, worried that false positives or negatives could allow some to spread the virus unknowingly, and stick others at home unnecessarily.

“This could undermine public trust towards testing and all other pandemic containment measures,” she told The Lancet.

Mike Tildesley, an infectious disease modeling expert at the University Warwick and a UK government scientific adviser, told CNN that it’s important to remember that a negative result only refers to one point in time.

“[J]ust because someone tests negative it does not mean that they will necessarily be free from infection a few days later,” he said. “So any mass testing strategy needs to be carried out at regular intervals (every few days) in order to be an effective strategy and to allow some lockdown measures to be relaxed.”

Slovakia’s push comes as cases of the virus are rising steeply in Europe. The U.K., France and Germany have all announced renewed lockdown measures.

Slovakia has had almost 60,000 confirmed cases and 219 deaths from COVID-19 – the bulk of which were in October.

President Joe Biden is set to deliver remarks about the ransomware attack on Colonial Pipeline, which forced the company to shut down operations...

How Covid-19 caused a global shortage of semiconductors, computer chips

It's not an overstatement to say that semiconductors power the modern world.They're not only a key component of nearly every electronic device we...

Jewelry sales could see a slowdown later this year as a broader range of economic activity resumes from a pandemic-induced slump, Signet CEO...

A participant holds a placard reading "One for all, all for one" during a rally in support of jailed Russian opposition leader Alexei...

What are they and do they work?